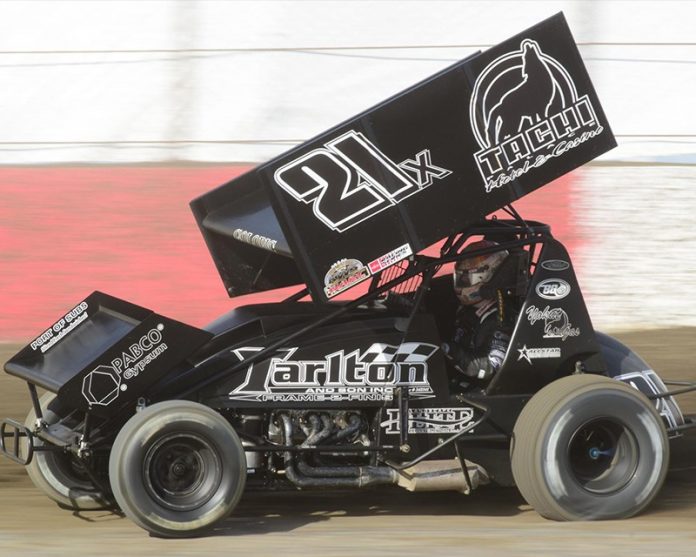 SACRAMENTO, CA … The 950-horsepower open wheel sprint cars of the King of the West-NARC Fujitsu Racing Series will make their final appearance of the season at the Tulare Thunderbowl Raceway on Saturday, June 2nd for the 17th Annual Brian & Chris Faria Memorial.

This marks the sixth stop on the ultra-competitive 16-race series that will ultimately crown the King of the West champion. To date, four different drivers have made appearance in victory lane, led by Elk Grove driver Shane Golobic who has scored twice.

This includes an exciting $11,000 victory at Tulare two-weeks ago where he took the lead with less than two-laps remaining in the 30-lap feature event. He also captured the season opener on April 8th at Kern County Raceway Park in Bakersfield.

“This is my first full-time effort chasing the King of the West-NARC driving championship,” states Golobic, who races at about 80 events a year in both sprint cars and midgets. “Car owner Tom Tarlton and Tarlton Motorsports have given me a great opportunity to earn the title this season by providing me with the best equipment and supporting cast.“

“That puts the onus on me to get the job done,” continued Golobic, “and trust me, I never want to let them down because they work extremely hard. They want this championship as much as, if not more than, I do.”


Even though he has posted a win and a third place finish at the Thunderbowl Raceway this season, Golobic admitted that the Tulare track surface has made his life tough.

Golobic states, “The track conditions at Tulare are challenging and we have to stay focused on them just to stay ahead of the curve. We almost have to have it down to a science to be competitive and there is a lot of questions to be answered. Will tire wear be a factor? What is the best line to run? Do we set up the car to be more competitive during the first half or last half of the event? All have to be answered and addressed to have any shot at winning.”

Among the other drivers looking to score their first victory of the season is Penngrove’s Chase Johnson and Buddy Kofoid; Roseville’s Colby Copeland; DJ Netto of Hanford; Jason Statler of Grass Valley; Elk Grove’s Bobby McMahan, Dustin Golobic of Fremont, Craig Stidham of Fresno and many others.

The King of the West-NARC racing format includes qualifying, three heat-races, a trophy dash, and the 30-lap Fujitsu/Hoosier sponsored headliner. Also on the racing card are the non-wing West Coast Sprint cars and the 305 Racesaver sprinters.

The Tulare Thunderbowl Raceway is located at the Fairgrounds in Tulare. Pit Gates open at 2:00 p.m. Front gates open at 4:00 p.m. Qualifying starts at 6:00 p.m. For more information, go to www.thunderbowlraceway.com or NARC410.com