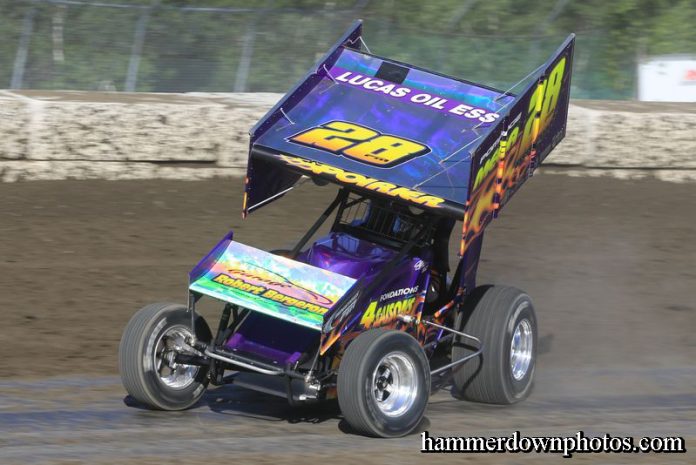 DRUMMONDVILLE, PQ – For seven-time champion Steve Poirier, his win on Saturday night in front of a sell out crowd at Autodrome Drummond completed his comeback from his injury suffered last September at the Canadian Sprint Car Nationals. Taking the lead just shy of halfway and then holding off Coleman Gulick for his 66th career Lucas Oil Empire Super Sprints victory.

The event kicked off both the 1000 Islands RV Centre Canada Tour and also the Fondations 4 Saisons Quebec Series. The win in the Mach 1 Chassis A-Main for the Saint Mathieu del Beloeil, Quebec native netted him $2,085.

“It feels good to finally win, to win after my injury last year and it’s been two years since we won here,” said Poirier, “The crew gave me a super car tonight, I could run high or low on the track and keep up my momentum.”


When Poirier, who started in eighth, swept past Paul Kinney, Alain Bergeron and Matt Tanner for the lead, a few restarts near the end made it interesting with Coleman Gulick starting along side.

“I still felt starting on the bottom was best for my car. I know Coleman likes the top but I felt if I restarted there it was going against what we were set up to do,” he went on, “So I stayed on the bottom and the car really took off so it was the right decision.”

The Drummond surface turned abrasive for the second half of the race and caught some teams off guard. “I talked to a friend earlier that ran a sportsman and he gave us an idea on what the track was going to do,” Poirier went on about his plan, “So we set up the car for the surface to do that and it did. That car was perfect, it feels good to get back in victory lane.”

For Gulick who started in seventh he did find the highside to his liking and once he also got passed the same three cars his sights were set on Poirier. “Once I got free into second I was hoping I could close in but Steve was fast,” Gulick noted afterwards. “My only chance was to try and get by on the restarts but I just couldn’t get enough of a run on him. I could have tried a slider but it was too risky so I didn’t want to take that chance.”

Gulick though was looking big picture however, “I really do want a win, it’s been a long time but we are also here to try and win a championship and with Jason dropping out it was a good points night for us,” he continued, “It was also good to put together a good night from start to finish.”

For Paul Kinney, another podium finish was still satisfying even after starting on the pole..which by the way isn’t his favorite.  “I hate starting on the pole.  You are either going to get the win or there’s only one other way to go and that is to fall back which usually happens more,” he said with a laugh, “But still, to finish behind Steve and Coleman is not bad. Anytime you’re on the podium it isn’t a bad night.”

Paul went on, “This is a new car and new motor. We are having some issue getting to motor to take off so I didn’t want to see those cautions there at the end. But, we will have some drinks, some food and on to tomorrow.”

Bergeron capped off a fine evening with a fourth place finish ahead of Tanner. Rounding out the top ten were Jeff Cook, Shawn Donath, Jordan Poirier, Matt Billings and Chad Miller.

A field of 27 sprints were on hand for the first event held in Quebec with the rain out at Granby the night before.