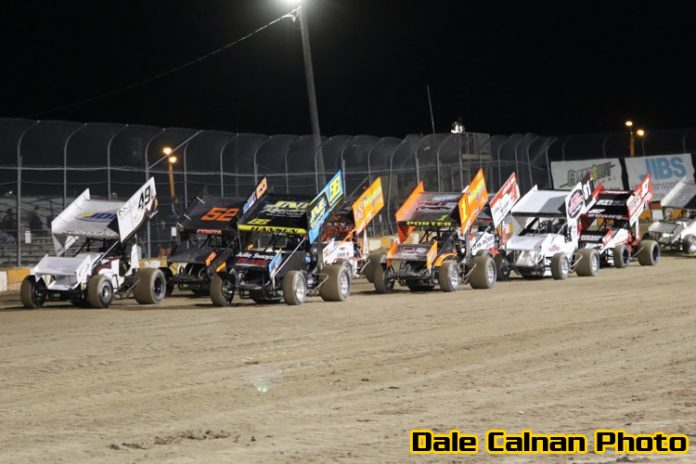 OHSWEKEN, ONT – The Action Sprint Tour powered by RaceRivalz.com is set to add another piece to its history books when the upstart tour visits South Buxton Raceway in Merlin, Ont. for the first time on Saturday, June 9. The Tour got off to an action-packed start as it logged two races into the history books at Ohsweken and Merrittville speedways last month with no fewer than 25 cars in attendance at each show.

In the Series’ inaugural race at Ohsweken on May 18, Aaron Turkey out-paced Jesse Costa to become the first-ever winner in the Series’ history. Behind the top two, youngster DJ Christie ran from the 20th starting spot to a third-place finish while Hagersville driver Lucas Smith and Scotland’s Shone Evans rounded out the top-five.

Three days later, the Tour shifted its focus to the Niagara Peninsula and Merrittville Speedway on May 21. There, it was Evans who claimed the win over Brad Herron, while Costa was on the podium for the second-straight race with a third-place finish. Turkey finished fourth while his teammate Holly Porter was fifth.

During the first race of the season, the Action Sprint Tour powered by RaceRivalz.com announced the creation of the Durnin Motors Front Row Challenge. At each race in 2018, one of the two drivers who is scheduled to start on the front row for the 20-lap Feature has the option to drop back to the 12th starting spot. Should they win from that starting spot, they’ll earn a $500 bonus from Durnin Motors. No driver elected to take the challenge at Ohsweken or Merrittville, which opens the door for one driver to make another piece of history at South Buxton.

While several teams have already registered for the Series’ inaugural campaign, teams who have not yet registered can fill out the Action Sprint Tour powered by RaceRivalz.com forms by clicking here. The $75 registration fee comes with several benefits for drivers, including admission to all events at the track’s member price and allows drivers to compete for a $7,250 point fund and up to $2,500 in bonuses. Drivers can submit their registration online and pay the $75 registration fee at the track on June 9.

For additional information on the Action Sprint Tour powered by RaceRivalz.com, including a full break down of the Series’ 2018 point fund and race purses as well as series rules, visit www.ActionSprintTour.com.