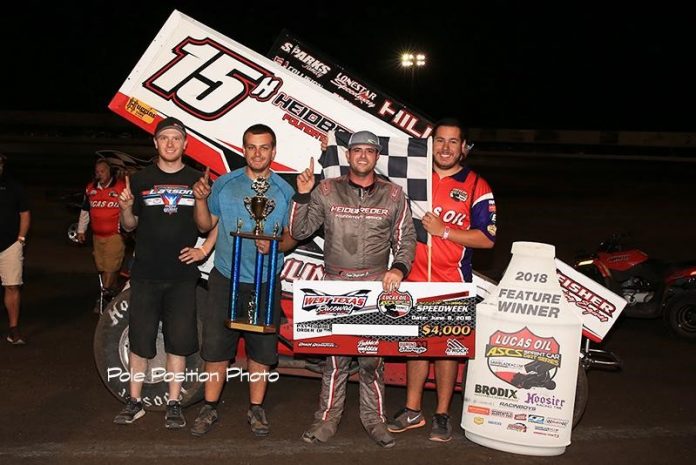 LUBBOCK, TX – Holding off the charge of Seth Bergman on the closing lap of Friday’s 30 lap A-Feature at West Texas Raceway, Sam Hafertepe, Jr. picked up his second National Tour win of the season to kick off the 2018 Lucas Oil ASCS Sizzlin’ Summer Speedweek.

“I knew he [Seth] was coming, lapped cars just had us so bottled up. Running the top in clean air was the best place to be and I’ll be honest, once we got rolling and got the tire pressure built up, we didn’t have our car really where it needed to be; especially in traffic. This track threw us a curveball all night so to sneak out of here with a win is awesome,” commented Hafertepe, who despite not feeling the car was at it’s best, lapped up to ninth place.

Trading the lead with Travis Rilat through two starts to open things up, the BDS Motorsports No. 1 set the pace with Hafertepe giving chase. Into traffic in a matter of lap, West Texas Raceway offered grooves from top to bottom with Rilat using them all to hold off the Hills Racing Team No. 15h.

Mired in non-stop traffic, the backmarkers went the way of Travis until Lap 18.
Pinched going into the third turn trying to advance past the No. 99, Hafertepe shot the bottom line to take over the lead. Pulling away to a half straightaway advantage as Seth Bergman rolled into the picture, the red flew on Lap 20 for Rilat as the No. 1 went upside-down in the second turn after contact with the outside wall. Travis was okay.

Restarting with a trio of slower cars between the first two positions, Hafertepe used full advantage to pull a nearly 1.5-second advantage before finding traffic again on Lap 23.
Forced to move around the three-eighths-mile oval, Seth Bergman was running his Oil Field Equipment and Manufacturing No. 23 for all it had. On Sam with two laps to go, Seth worked the bottom of the first and second turns with Hafertepe able to use traffic to keep Bergman at bay. Set up for the run on the closing lap, Seth was there again in turns one and two. Still not able to make the pass, Seth railed the top of the third and fourth turns as Sam ran down a slower car.

Barely clearing the slower machine in the middle of turns three and four, it was just in time to hold off Bergman at the line. Entering tied for the point’s lead, the win advanced Sam Hafertepe, Jr. back to the top of the standings by eight over Seth Bergman.

Picking up the night’s CP-Carrillo Hard Charger of the Night, Sammy Swindell rolled from 11th to third. John Carney II in fourth was followed by eighth starting Jake Bubak to complete the top-five. Scott Bogucki crossed sixth with Pennsylvania’s Mark Smith in seventh. Having to drop to the tail after spinning on the opening laps, Johnny Herrera fought back from 22nd to eighth. Harli White and Matt Covington completed the top-ten.

A field of 22 drivers on hand dropped into three Heat Races with wins going to Scott Bogucki, Seth Bergman, and John Carney II. No B-Feature was needed.

The Lucas Oil ASCS Sizzlin’ Summer Speedweek continues Saturday, June 9 at Route 66 Motor Speedway in Amarillo, Texas with the action getting underway at 7:00 P.M. (CDT). Admission is $20 for adults, $10 for youth 5-10, and free into the grandstand for kids four and under.