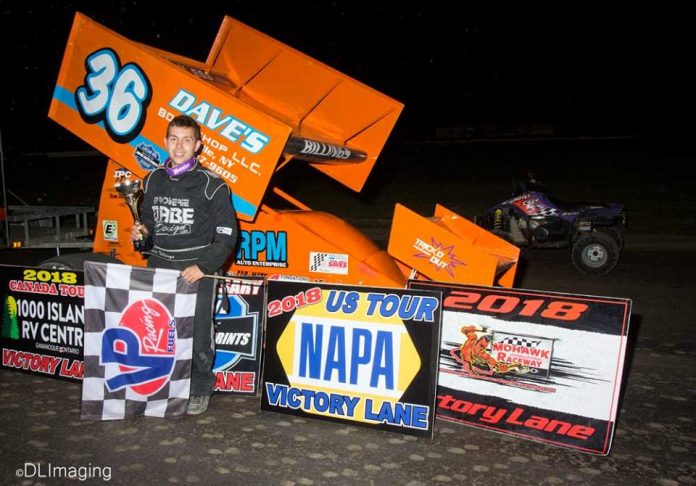 AKWESASNE, NY – Matt Billings earned a win with the Lucas Oil Empire Super Sprints last season in a one off pavement event in Quebec.  On the dirt side, he had several good runs in his short Sprint Car career but he has never able to crack into victory lane.   That was until this past Friday night at the Mohawk International Raceway.

Billings, of Brockville, Ont., had to earn the win after an intense battle with fellow Canadian Jordan Poirier.  The duo swapped the lead multiple times with Billings coming out on top at the conclusion of the 25-lap A-Main presented by Mach 1 Chassis.  The event was part of the NAPA Auto Parts US Tour as well as the 1000 RV Centre Canadian Invasion Series.

“This thing was good,” stated Billings driving a Mach 1 Chassis.  “I guess it all just worked out.  I can’t thank Mike (Stelter) enough and everyone that helps out on this thing.  This is an opportunity I don’t know how I got it but I want to hold on to it as long as I can.  I’m having a blast.  Hopefully I can keep running like this.”

Josh Flint and Dan Douville brought the field up to speed from the front row.  Douville won the battle into turn one to take the lead.  He went right up to the cushion to hold the top spot.

Douville remained on top of the heap as he quickly closed on the tail of the field.  Eight laps were complete when Douville was into traffic for the first time.  While he tried to navigate traffic, Poirier was searching for an opening.

Billings found his groove and moved into fourth on lap 10 from eighth, then two laps later he dove low in turns one and two to take the lead passing three cars.  As everyone in the top three tried to work the top, Billings went low.  He used the bottom groove to go by Douville, Poirier and Flint.

Just as Douville had to maneuver traffic, Billings had his own issues with the back-end of the field.  He bobbled on lap 15 which opened up the lane for Poirier to shoot by him for top spot.  Billings checked up for a moment in traffic and that was enough for Poirier.

Now the leader, Poirier also struggled to get by slower cars.  His difficulty allowed Billings to stay on his rear bumper.  Poirier was never more than a few feet in front of Billings.   The duo remained glued together as the race reached its final stages.

Four laps remained when Poirier made a costly mistake.  Although it was only a small hiccup it was enough to allow Billings to drive on by on the bottom of turns three and four.  Billings would not surrender the lead again as he planted his Mike Stelter owned No. 36 on the bottom.

“I was thinking ‘what an idiot’ when I gave the bottom up,” commented Stelter.  “It was so fast there on the bottom.  It was just like in the hammer down lane on (Interstate) 81.  You get up on the top and it’s like sliding through ice and coming to stop.  I’m glad I got back by and made up for my mistake.”

Billings took home the $2,000 win with Poirier crossing the line second.  The Quebec driver was very disappointed after the feature as one mistake cost him the victory.

“All I can say is second sucks, but Matt did a hell of a job,” said Poirier.  “I gave him the inside and I missed it.  At the end he was a lot quicker than me so I wasn’t able to catch him.  That was so close.”

Billy VanInwegen got things rolling late allowing him to drive up from 11th to finish in third.  The former Modified driver had never raced a Sprint Car at Mohawk prior to Friday night’s feature.

“I tell you one thing I learned running down at the Hard Clay (Orange County Fair Speedway) is how to run around in the rubber,” cited VanInwegen.  “You can smell it a mile away.  Once it laid rubber, we went with the harder tire and it really came to life.  It was a lot of fun to roll around the yuke tires like that and pass a lot of good cars.”

A field of 31 sprint cars filled the pits of the first of a two-race weekend in Upstate NY.