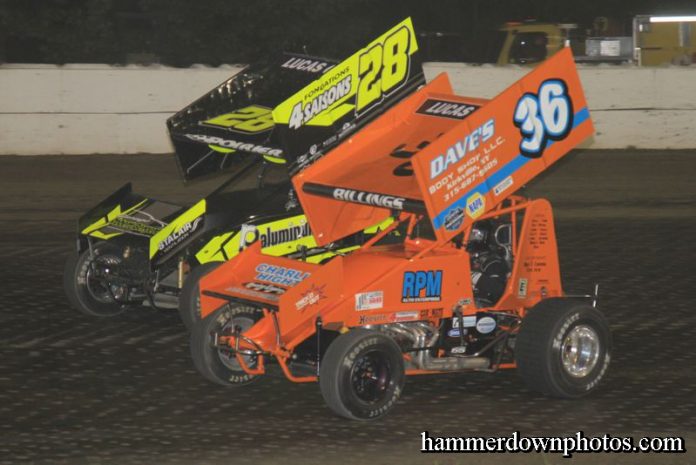 AWKWASANE, NY – It’s an annual tradition at the Mohawk International Raceway as the Lucas Oil Empire Super Sprints made their annual stop for 2018 this pastFriday night. With the Twin Leaf Convenience 358 Modifieds and Bandits having the night off the racing was just as intense and title sponsor Akwesasne Mohawk Casino along with the great race fans were treated to a great night of racing action

In the 25 lap Empire Super Sprint A main event former 358 Modified driver Dan Douville raced in to the top spot over Josh Flint, Chad Miller, Jordan Poirier and Coleman Gulick. A fast groove on the outside lane saw Douville drive to a comfortable advantage in the early laps as the rest of the field tried to keep pace. Poirier was on the move early as he charged to 2nd by lap 7 with Flint, Miller and Matt Billings making his way into 5th. As the laps clicked off at a fast pace Matt Billings was on the move in his Mike Stelter owned ride. With the leaders in traffic Billings made a powerful move charging from 4th to take over the top spot on lap 11 from Douville and began to drive away. Jordan Poirier however was not about to let him slip away as he reeled in the leader. On lap 12 as the track began to change Billings slipped in turn 3 allowing Jordan Poirier to get by and it seemed as if he was on his way to career win number 2. With 5 laps to go while in traffic Poirier made a small mistake in turn 3 allowing Billings to retake the lead. with Poirier dropping to 2nd with Billy VanInwegen on a late charge to 3rd over Matt Tanner and Steve Poirier. On this night it was all about the Brockville Ontario native as Matt Billings used his experience at the speedway to score his 2nd career Lucas Oil Empire Super Sprint win and first on dirt. Jordan Poirier held on for 2nd over Billy VanInwegen, Matt Tanner and Steve Poirier.

In the 25 lap Crossroads Tobacco Sportsman feature veteran Bruce Makinson raced out to the early lead with Andy Howard, Miguel Peterson, Thomas Cook and Brianna Ladouceur making up the top 5 early on. Makinson had a stout race car all evening and was fast in the early laps but Miguel Peterson was making a charge early on. On lap 8 Peterson ran down the race leader and was putting pressure on Makinson for the top spot. On lap 11 Peterson finally made his move on the top lane to charge to the lead bringing Thomas Cook to 2nd over Makinson, Ladouceur and now Cedric Gauvreau making up the top 5. After switching to a different chassis in the off season Brianna Ladouceur has had much success in 2018 and was running great on this night as she charged to 2nd on lap 14 using the inside lane and was making a run at the race leader. On lap 17 Ladouceur used a string move down low to take over the top spot over Peterson, Thomas Cook, Gauvreau and Howard. As the laps wound down Ladouceur continued to get faster and began to pull away. After a  year of frustrations in 2017 this new year could see big things as Brianna Ladouceur would go unmatched to score her 2nd win in a row in the Crossroads Tobacco Sportsman ranks, something she had never done in her relatively short Sportsman career. Thomas Cook held on for 2nd with Cedric Gauvreau Andy Howard and Miguel Peterson making up the top 5.

The Green’s Performance Mod Lite division was set for 20 laps last week’s winner Deric Ellsworth wasted little time taking the lead in the early going as he pulled out to a solid margin over Kevin Parenteau, Dan Reif Nick Mallette and Eric Desilets. Ellsworth was quick but Dan Reif was on the move early on and would be a factor in the outcome of this event. On lap 10 the caution flew tightening up the field which would be a key moment for Brad Reif. When the green flew Brad Reif charged by Ellsworth to grab the top spot with Dan Reif now 2nd and Ellsworth relegated to 3rd. The Reif family would pull away and put on a show for the fans in the late stages. On lap 16 the final yellow flew as Brendan Villnave spun his car in turns 3 and 4. When the green flew Dan Reif made his move taking the top spot away from his uncle Brad. Dan Reif stayed smooth over the final laps and would not be denied taking his first win of the year making it 3 different winners in 3 events. Brad Reif would cross in 2nd followed by Deric Ellsworth Kevin Parenteau and Harley Brown would round out the top 5.

In Novice Sportsman Cory McCoy may have started on the pole but it was Josh Laware taking over the top spot with Dale Gonyo, Jason Rose and Eugene Tarbell completing the top 5.  Laware was strong on this night but last week’s winner Jason Rose was also a threat as he charged to 2nd just past halfway and was looking to run down the leader. As the laps wound down Laware was looking to get his first ever win  but Rose was there to challenge and Dale Gonyo also threw his name in the hat making it a 3 way battle for the win with Cory McCoy and opening day winner Corbin Millar completing the top 5. On the final lap Jason Rose did all he could to get by and even used a little chrome horn but it as not to be at Josh Laware would hold on and become the 4th different winner in 4 events in Novice Sportsman. Jason Rose held on for 2nd over Dale Gonyo, Corbin Millar and Eugene Tarbell.

The Quebec Lightning Sprints kicked off the first of 5 races in their 417 Bus Lines Championship. Mathieu Bardier was fast in the early going over Xavier Lauzon and Jordan Poirier. Before the halfway point Poirier who was fresh off a 2nd place run with the Empire Super Sprints would slow in turn 2 ending a chance at another podium finish. On the restart Bardier would remain in control but Lauzon and now Guillaume Neiderer would make it a solid 3 car fight for the win. In the closing stages Lauzon would make a race out of it but Mathieu BArdier would charge on to win the series opener. Xavier Lauzon took 2nd with Guillaume Neiderer taking the final podium spot.

Next week all 5 divisions will be on hand for a full night of action with long time track supporter Brass Horse on hand as the evenings sponsor. Racing gets underway at 7:30pm. For more information and up to date news about what’s happening at Mohawk International Raceway, check out our website at mohawkintlraceway.com or follow us o Facebook and Twitter.