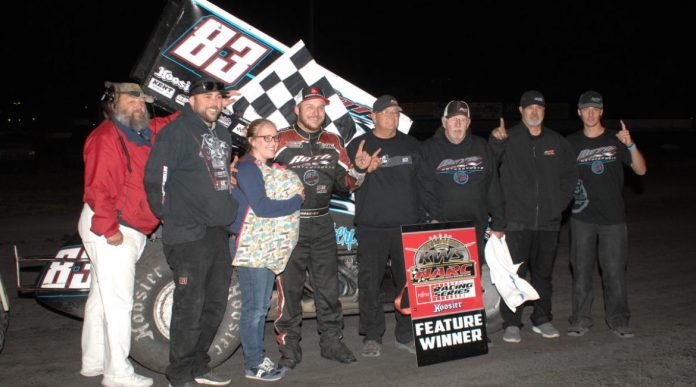 Hirst, driving the 25th Anniversary Roth Investments KPC owned by Dennis & Teresa Roth, started on the outside of the front row and spent the first third of the contest tailgating his brother-in-law and race leader Willie Croft, while holding off the advances of Buddy Kofoid.

Hirst inherited the lead on the 11th circuit when he narrowly avoided Croft in traffic, who spun out powering out of the fourth corner to bring out the caution. Tenth starter Colby Copeland was taking no prisoners on his drive to the front. Driving the Larry Antaya Motorsports Fuel Curve Maxim, Copeland passed Billy Aton to move into seventh place on lap six, won a spirited battle with Shane Golobic to take fifth on lap 10, and launched a slide job on Kofoid to take over the runner-up spot on the 13th circuit.

However, Hirst had the car to beat and used it to masterfully slice and dice his way through slower traffic and effectively avoid all challengers. He survived two more caution periods during the final 10-laps on his way to securing a healthy 10-car length $3,000 victory. Copeland’s runner-up finish was his best of the season.

“I was hoping I could mix it up a little more with Willie (Croft),” said Hirst in victory lane, “but I’ll take the lead any way I can get it. Once again, I really need to thank my team for giving me another fantastic car to drive tonight.”

The open wheel battle of the night was for the third through sixth positions. Kofoid, Shane Golobic, Chase Johnson, and Bud Kaeding battled fiercely wheel-to-wheel during the second half of the contest. Golobic managed to motor past Kofoid for the third spot with six laps remaining and held that position until the finish. He was piloting the Tarlton Motorsports KPC.

Heat races were picked off by Copeland, Matt Dumesny, and Kofoid.