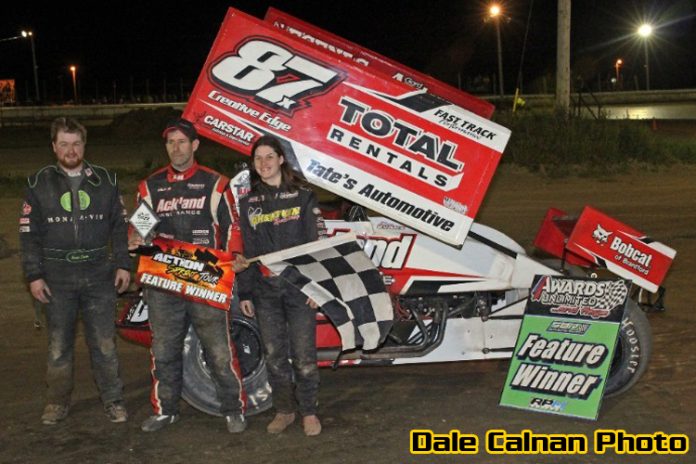 MERLIN, ONT – Shone Evans took advantage of his front row starting position to take the lead from polesitter Holly Porter on a lap 11 restart and was mistake-free around the tight but racey South Buxton Raceway over the final nine laps to score victory in the Action Sprint Tour powered by RaceRivalz.com’s inaugural visit to the Merlin, Ont. 1/3-mile oval.

The victory was also Evans’ second straight win with the Action Sprint Tour powered by RaceRivalz.com following his victory at Merrittville Speedway back on May 21.

At the drop of the green flag, Porter jumped out to an early advantage in her No.1, but was reeled in by a lap one caution when fourth-starting Aaron Turkey was involved in an opening lap incident that caused a flat right-rear tire and a broken nose wing. The team went to the work area and successfully replaced the tire, but returned to the track with damage still to the nose wing.

When the race returned to green, Porter maintained the lead up front while several drivers made their moves from the middle of the back to the front, including Ryan Hunsinger who charged forward from 12th to finish fourth and Al Gilletta Jr., who earned the night’s Hard Charger award in his No.22, by driving from the dead last 22nd starting position to claim a 12-place finish.

Porter paced the field to the halfway point, but saw her lead evaporate as the caution flag waved after the completion of lap 10 when Turkey hit an infield implement tire that resulted in significant damage to the car’s front end and ended his night early.

The ensuing restart gave Evans all the track position he needed to take a shot at the lead and he made the most of it. Evans grabbed the lead from Porter on lap 11 and then held off Porter over the final nine laps to secure the victory. Porter earned the runner-up spot while St. Thomas, Ont. driver Jesse Costa recorded his third-straight podium finish on the tour with a third-place finish. Hunsinger and 10th starting Jerry Hill rounded out the top-five.

Evans, Costa and Jacob Dykstra were heat race winners earlier in the night.

The Action Sprint Tour powered by RaceRivalz.com returns to action on Father’s Day Sunday, June 17 to make its debut appearance at Humberstone Speedway in Port Colborne, Ont. For more information on the Action Sprint Tour, including a full scheduled, points, purses and point fund, visit www.ActionSprintTour.com.