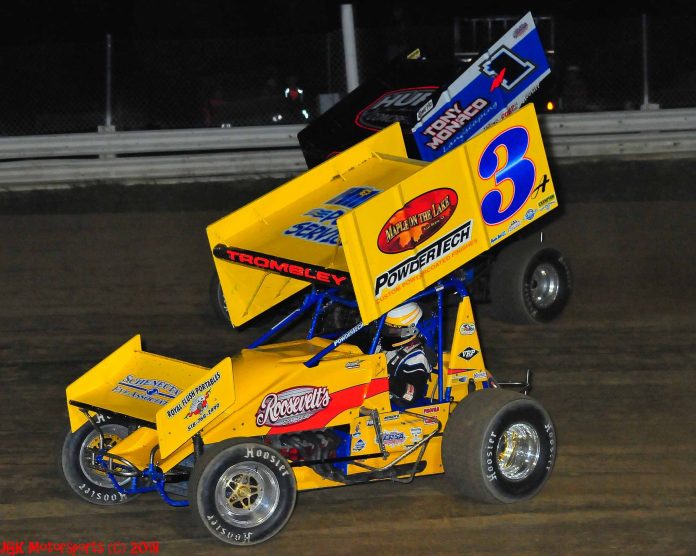 WOODHULL, NY – The SuperGen Products with Champion Power Equipment CRSA Sprint Car Series made its way to its western most stop on the 2018 schedule Saturday night’s the Woodhull Raceway. With a star-studded field and a packed grandstand, the series would see its first repeat winner in Jeff Trombley.

Trombley, the defending series champion redrew the fourth starting spot for the night’s 25 lap A-Main event. The redraw was held in front of the grandstands with the help of six children picked from the crowd. Justin Mills and Emily VanInwegen drew the front row with Peter Dance alongside of Trombley. Bobby Hackel, IV and Tyler Jashembowski redrew the fifth and sixth positions.

In lieu of the traditional four-wide salute, the CRSA paid tribute to the late Dolly Eccleston by way of a single file salute. She recently passed away and was a big part of the Woodhull Raceway family.

Mills and VanInwegen led the field to the green with Trombley quickly taking over the top spot. Trombley had the field covered as once he took the lead, he pulled away. Mills looked strong early, as did Hackel and Jashembowski.

Hackel, who destroyed a car at the Land of Legends Raceway on Memorial Day Weekend, returned with a new car and a mission to get to the front. He would have entertaining battles with Mills and Jashembowski throughout the early parts of the event.

In the end Trombley would pick up the win over Hackel, Jashembowski, Mills and Sydney Prince. Heat races were won by Trombley and Mills. The Magsarus Ignitions Electrifying Move of the Race Award ($25) was won by Hackel while 12th place starter and sixth place finisher Dana Wagner was the Hard Charger.

Trombley came into the evening second place in points, he now takes over the points lead with the win.