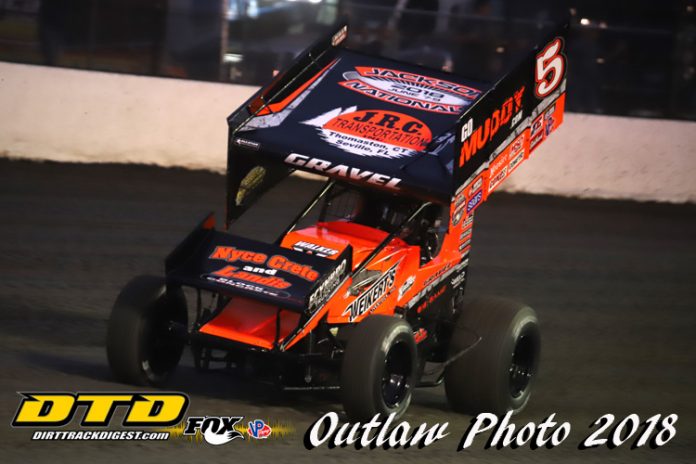 The 2018 edition of the race will mark the 12th year the Outlaws have competed at the three-eighths-mile located at the North Dakota State Fairgrounds. The Magic City Showdown will serve as the “Grand Finale” of Minot’s Ribfest, which runs from June 15-17.

David Gravel snapped Donny Schatz’s five-race win streak at Nodak Speedway last year. Schatz ended up finishing second at his home track, with Gravel scoring his second win of the season in the state of North Dakota, to go along with a triumph at River Cities Speedway in Grand Forks.

Schatz won for the first time at Nodak Speedway in 2012 and racked up five straight wins at the oval in the following handful of years. The North Dakota native picked up one win in his home state during the 2017 season, visiting victory lane at River Cities Speedway. Schatz, who is a nine-time series champion, currently leads the series standings and has racked up nine wins thus far in 2018.

Daryn Pittman, the 2013 World of Outlaws Craftsman Sprint Car Series champion, is a previous winner with the series at Nodak Speedway. The Oklahoma native, who now calls Indiana home, has three wins this season and is fifth in points.

Brad Sweet heads into the Magic City Showdown second in the series standings on the strength of a pair of wins to go along with 20 top-10 finishes. Gravel, who has three wins so far in 2018, is third in points, with Shane Stewart, who is chasing his first victory on the season in fourth.

Sheldon Haudenschild, who is having a breakout season and is up to four wins already this year, rides sixth in the standings. Jason Johnson currently is seventh in points, followed by Logan Schuchart in eighth, rookie Ian Madsen in ninth and Brent Marks in 10th.

A couple of the veteran drivers, following the World of Outlaws Craftsman Sprint Car Series, who will be in action at Nodak Speedway are Kraig Kinser, Jason Sides and Greg Wilson.

Jacob Allen and Clyde Knipp, two of the youngest drivers on the tour are back again with the Outlaws in 2018.

Tickets for the Gerdau Recycling Magic City Showdown presented by Schatz Crossroads and Fastlane Car Wash featuring the World of Outlaws Sprint Car Series at Nodak Speedway in Minot, N.D., on Sunday, June 17 can be purchased in advance online at https://slspromotions.ticketforce.com or by calling 815-344-2023 and at the track on race day.