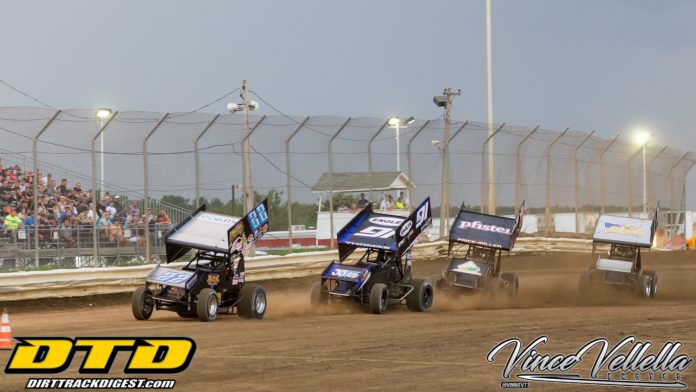 BROWNSBURG, IN – The 2018 Arctic Cat All Star Circuit of Champions presented by Mobil 1 schedule will hit high gear beginning Friday evening, June 15, as the Tony Stewart-owned organization is set to take on the most grueling segment of its 2018 campaign; Ohio Sprint Speedweek. Comprised of nine events in nine days, the 36th edition of Ohio Sprint Speedweek is sure to attract sprint car competitors from coast-to-coast, each chasing the right to etch their name in the All Star Circuit of Champions history books and become a Speedweek champion.

Cometic Gasket, the official gasket of the Arctic Cat All Star Circuit of Champions presented by Mobil 1, will return in 2018 as the title sponsor of Ohio Sprint Speedweek, extending its relationship with one of the sport’s most historic, yet grueling traditions to four consecutive seasons.

“Ohio Sprint Speedweek is rich in tradition and competitiveness, two qualities we are certainly proud to be associated with,” said Bob Gorman, Founder and CEO of Cometic Gasket Inc . “We are thrilled to bring Cometic Gasket and Ohio Sprint Speedweek back together in 2018. It’s an exciting time for us, and it’s an exciting time for sprint car competitors and fans, alike. We’re excited to see how the week unfolds.”

C&R Racing, a global leader in design and production of specialized cooling solutions used by top-tier race teams, high-end automotive manufacturers, and in specialty vehicle applications worldwide, will join Cometic Gasket as a major contributor to Ohio Sprint Speedweek in 2018 and will take on the role as presenting sponsor.

“We are all very excited at C&R to be a part of Ohio Sprint Speedweek in 2018,” said Jim Ryder, General Manager of C&R Racing. “This is a perfect opportunity for us to share our presence in motorsports to dozens of race teams and showcase our product line to potentially thousands of race fans, all while supporting one of the country’s most historic and competitive sprint car events. I think we are all in for a real treat.”

In addition to Cometic Gasket and C&R Racing, Kear’s Speed Shop, Chalk Stix, Hoosier Tire, as well as all of the participating Ohio Sprint Speedweek facilities, each helped boost the Speedweek championship fund to its $10,000 total, a $7,000 increase from 2017. $3,000 will be awarded to the Speedweek championship team owner, followed by $1,500 for second, $1,200 for third, $1,000 for fourth, and $800 for fifth, decreasing by $100 per position from sixth through tenth in the final standings.

In order to be eligible for the Cometic Gasket Ohio Sprint Speedweek presented by C&R Racing championship points fund, participating teams must have perfect Speedweek attendance, entering all contested Speedweek programs throughout the nine-day schedule. In addition, team owners must enter at least 50% of the contested Speedweek events with the same driver.

Adding even more hype to the 2018 Ohio Sprint Speedweek schedule, Saturday’s finale at Atomic Speedway, the inaugural Rick Ferkel Classic, will award a $10,000 top prize. All of the other Speedweek programs will award $5,000 paydays.

MAVTV Motorsports Network, the official television home of the Arctic Cat All Star Circuit of Champions presented by Mobil 1, will be on hand to capture all of the action from the first two rounds of Cometic Gasket Ohio Sprint Speedweek presented by C&R Racing at Attica Raceway Park and Eldora Speedway. Set to air on September 16 and September 23, respectively, each event will air twice during its replay date; 8 p.m. and 11 p.m. ET.

Picking up with action at Waynesfield Raceway Park on Sunday, June 17, Speed Shift TV will broadcast six nights of Ohio Sprint Speedweek action live on the Web. Those interested in learning more should visit www.speedshifttv.com.