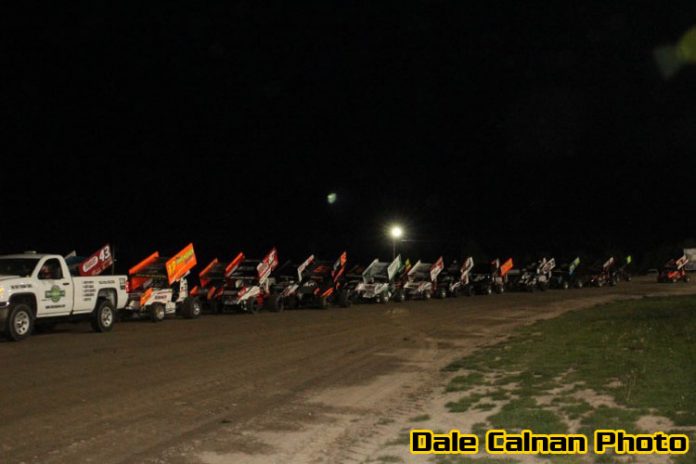 OHSWEKEN, ONT – The Action Sprint Tour powered by RaceRivalz.com is gearing up for its debut appearance at Humberstone Speedway in Port Colborne, Ont. on Sunday, June 17 for a special Father’s Day showing. The race marks the fourth event of the upstart tour’s inaugural season.

Although Sunday’s race is the first Action Sprint Tour event at Humberstone, Crate-powered Sprint Cars have raced at the fast 1/3-mile track three times over the past two seasons, helping to spawn the creation of the Tour in 2018. Dylan Westbrook, currently a 360 Sprint Car driver, won both 2017 appearances while current Action Sprint Tour pilots Holly Porter and Jerry Hill earned second-place finishes.

Shone Evans, the current Action Sprint Tour point leader, won the first-ever Crate Sprint Car race at Humbertsone back on June 16, 2016 and now two years and a day later will look to extend his Series win streak to three consecutive races with a Father’s Day victory at the Port Colborne track. The Scotland, Ont. native picked up the win last Saturday at South Buxton Raceway in Merlin, Ont. after winning at Thorold’s Merrittville Speedway in May.

Evans’ early season success has placed him at the top of the Series point standings, but he holds a narrow seven-point advantage over St. Thomas, Ont. driver Jesse Costa, who has finished each of the first three events on the podium. Hagersville, Ont. native Jerry Hill currently sits third in the standings, 38 points back of Evans. However, his advantage is just three points over Styres Racing teammates Holly Porter and Aaron Turkey who sit tied for fifth.

Through three races, none of the drivers to start on the front row have attempted the Durnin Motors Front Row Challenge. The challenge offers a $500 bonus if one of the two drivers scheduled to start on the front row of the Feature drop to the 12th starting spot and win. Humberstone’s configuration allows for close quarters racing, but also typically offers a wide, two-groove racetrack, a perfect storm for a driver to accept the Durnin Motors Front Row Challenge and make a charge to the front.

A total of 33 different drivers have attempted to qualify for an Action Sprint Tour powered by RaceRivalz.com race in 2018. The Series saw 30 cars at its inaugural event at Ohsweken Speedway on May 18 and has had at least 22 cars in attendance at each race.

Race time at Humberstone Speedway is 6:30pm with Pit Gates opening at 4:30pm for competitors. For additional event information, visit www.HumberstoneSpeeway.com. For additional information on the Action Sprint Tour powered by RaceRivalz.com, including a full break down of the Series’ 2018 point fund and race purses as well as series rules, visit www.ActionSprintTour.com.