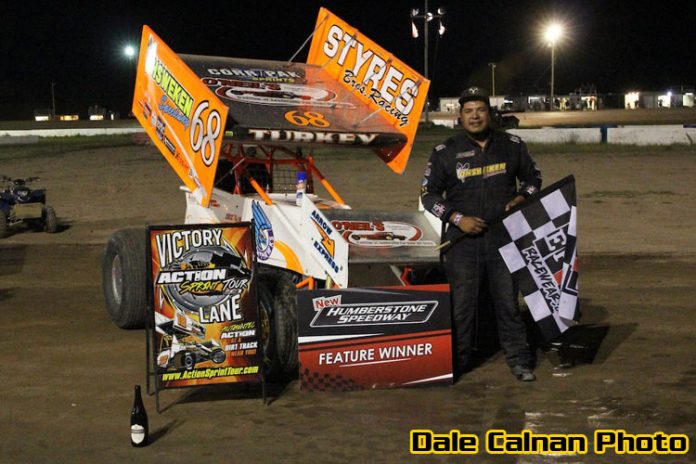 PORT COLBORNE, ONT – Aaron Turkey took full advantage of his pole starting position led all 20 laps of the Feature event to score his second career Action Sprint Tour powered by RaceRivalz.com win in the series’ inaugural stop at Humberstone Speedway on Saturday night. The Ohsweken, Ont. driver turned in a perfect score card as he won his heat race before selecting the pole in the pre-race redraw and then held off teammate Holly Porter in the main event.

“It’s really cool,” Turkey said of the victory. “I’m shocked I did it on the bottom. I usually like cruising around on the high side, but I’m really glad to get it done.”

When the green flag dropped, a handful of early cautions slowed the race, including one involving Ryan Hunsinger, who spun in a battle for third and collected point leader Shone Evans, ending his night. Turkey pulled away on the restart, anchoring his car to the bottom lane. Behind him, Porter and local driver Jacob Dykstra of Port Colborne, Ont. raced away from the rest of the pack. Tenth-starting Brad Herron made his move forward despite a collapsed left side board on the top wing of his No.12, racing up to fifth before the third and final caution of the race for a spun Jerry Hill on lap eight.

On the ensuing restart, Turkey was again able to pull ahead of Porter who stayed within striking distance for some time before eventually fading back to a half straightaway deficit while still maintaining a five car-length lead over Dykstra.

“The track got really slick and really technical, but it was a lot of fun,” Porter said following her second-place finish.

Rounding out the top-five was Herron, who earned the night’s hard charger award with a drive from 10th to a fourth-place finish, and youngster Liam Martin in fifth.

The incident to Evans dropped him to second in the championship standings and allowed Jesse Costa, who entered the race second in the standings, to take over the point lead with a seventh-place finish.