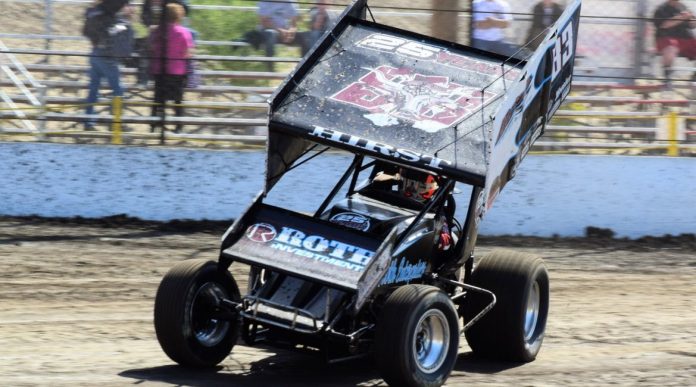 Hirst started on the outside of the third row and blew past Australian Matt Dumesny and Mitchell Faccinto on the first lap, and Willie Croft on the fourth circuit to secure the runner-up position. By that time, Golobic had established a 15-car length advantage, but it was wiped out by a caution flag for a spinning car on lap six. On the restart, Golobic once again jumped out to a healthy 12-car lead until he encountered slower traffic.

Hirst took advantage of the situation and quickly reeled in the leader to set the stage for his winning move. On the 14th lap, Hirst and Golobic powered out of the second corner side-by-side in a no holds barred drag race down the backchute. Hirst didn’t flinch and took the point sliding under Golobic as they drove hard into the third turn. Once out front, Hirst never looked back and went on to pocket a $4,000 payday, which included a $1,000 bonus from Hydrochem PSC.

“Shane (Golobic) was running good out front, but lapped traffic allowed me to catch him,” said Hirst. “I knew we would race each other clean and we both let it all hang out down the backstretch. Neither one of us was going to lift.”

Hirst went on to thank this car owner and crew for providing him with an excellent race car.

Golobic recorded the runner-up spot in the Tarlton Motorsports Tachi Palace KPC sprint car. Dumesny was steady throughout the contest and finished a King of the West-NARC career best third. He was piloting Rod Tiner’s Simmons Contracting/ART-sponsored Maxim.

Croft was fourth in his Amerikote EMI sprint car, chased by defending series champion Bud Kaeding in the Williams Motorsports Alviso Rock Maxim. Kaeding’s crew had to change a motor after their heat, but the hard work paid off as they earned the Swift Metal Finishing Hardcharger Award after starting 11th.

Jarrett Soares was taken to a local hospital after a violent crash during hot laps. He suffered a concussion, deep lung and rib bruises, and a lower leg injury. He is expected to recover.”