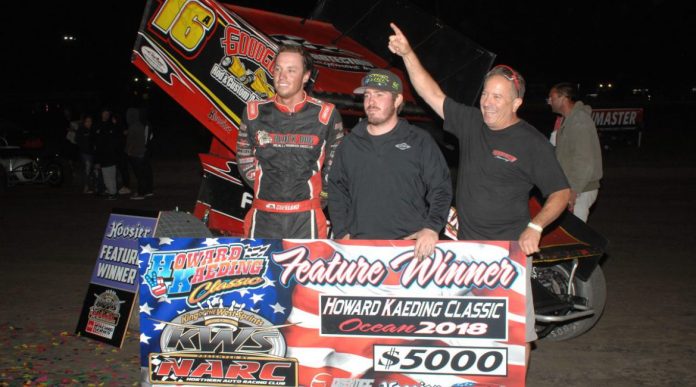 Copeland started on the outside of the front-row and posted an impressive 30-lap green-to-checkered run aboard Larry Antaya’s potent GoodGuys Rod & Custom Association/Fuel Curve-backed Maxim. Their efforts were worth a $5,000 paycheck.

However, his victory didn’t come easy as he had patiently wait his way through six caution periods, escape a run in with the concrete wall, and a hold off a persistent Bud Kaeding in the second half of the event.

Copeland won a drag race down the frontchute against polesitter Sean Watts on the initial green and quickly jumped out to a 10-car length advantage as the field sorted itself out behind him.


Chase Johnson, ARP fast qualifier Buddy Kofoid and Shane Golobic mixed it up in a heated battle for the runner-up spot in the early going, until Golobic spun and brought out the caution on lap 10. Two laps later, Kurt Nelson found himself upside down on the backchute to bring out the red. And on the ensuing restart, Australian driver Matt Dumesny made contact with another car and flipped hard in turn four to stop the action again. Nobody was hurt, but for Copeland in meant his lead kept getting erased.

Bud Kaeding, in the Williams Motorsports Alviso Rock Maxim, started 11th and motored his way into contention by powering past Kofoid for the runner-up spot on lap 13. Kaeding began to reel in the leader as the pair approached heavy traffic on lap 20. However, the caution came out again for a crash involving Watts and Justin Sanders.

With only two remaining, Kofoid and Thorson tangled while dueling for the fourth spot bringing out the final caution of the night. This set the stage for a Copeland-Kaeding shootout, but Copeland wasn’t about to take any prisoners and cruised to the win.

“I don’t normally look at the scoreboard, but I did this time and saw that Kaeding was behind me,” said Copeland. “I know he runs really good here so I just ran the best lines that I could.”

“I made a mistake jumping the cushion once in two and ended up smacking the wall,” he continued. “But I held it together and kept it going. I have to thank my team because they’ve worked really hard for me all season long.”

Kaeding earned $2500 for his second place finish. Johnson posted the best overall workman’s effort after starting third. He fell back to as far as seventh at one point, but battled back to third after passing Kyle Hirst on the final lap. Johnson was piloting the Safecraft Safety Equipment Maxim owned by Shawn Thomas.