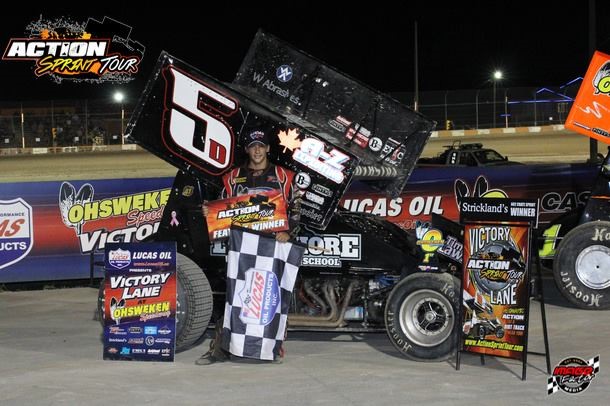 OHSWEKEN, ONT – Jacob Dykstra made his history on Friday night as the Port Colborne, Ont. teenager became the first driver to win two consecutive races with the Action Sprint Tour powered by RaceRivalz.com. Dykstra, who started on the pole, used a lap 11 pass to get by fellow front row starter Holly Porter and score the win at Ohsweken Speedway on Friday, August 3.

“A month ago we were running mid-pack and now we’re up here in Victory Lane,” Dykstra said following the win. “I’d like to thank all my sponsors Pan Abrasives, Tim’s Lawncare, A-Z Expediting and Lakeshore Catholic High School. I wouldn’t be here without my dad. He’s been the biggest help.”

The Action Sprint Tour powered by RaceRivalz.com was making the second of three appearances at Ohsweken in 2018 and had 30 cars locked in for competition. It was Dykstra and Porter leading the field to full speed for the 20-lap Feature after both drivers declined to drop to 12th for a shot at the Durnin Motors Front Row Challenge $500 bonus.
Porter jumped out to an early advantage, but Dykstra stayed close as the two drivers raced away from the pack and into lapped traffic by lap seven. On lap nine, the field was reset after a caution for a spun Brad Herron in turn four. The restart saw Porter lead Dykstra, Matt Hill, Shone Evans and Liam Martin back to green.

Dykstra again stayed with Porter and on lap 11 took the lead in the outside lane with a good run off turn two and down the backstretch. The top two again stormed away from the field while Evans got around Hill for third on lap 13.

The second and final caution of the race came on lap 15 for debris in the racing groove in turn four. The restart proved no problem for Dykstra though, as he gained an excellent jump and paced the final four laps to score his second straight win with the Action Sprint Tour. He also joined Evans and Aaron Turkey as the third driver to win multiple races on the tour. Each of the three drivers now has two wins in the tour’s six race history.

Hannah Ferrel drove to a fourth-place finish while Aaron Turkey claimed fifth. Lucas Smith earned the Hard Charger award on the night with a drive from 18th to sixth. Matt Hill earned a strong seventh-place finish while Jesse Costa, who entered the night at the series point leader, finished eighth. Rounding out the top 10 were Dereck Lemyre and Liam Martin.

Jerry Hill won an exciting B-Main and claimed the 19th starting spot for the Feature after a move on the final corner of the final lap allowed him to squeeze past Rob Neely.

The Action Sprint Tour continues its inaugural season on Sunday, August 12 at Humberstone Speedway. The series has already made one stop at the Port Colborne, Ont. track in 2018 and Aaron Turkey picked up the win on June 17. Race time is 6:30pm. Additional event information is available at www.humberstonespeedway.com. For more information on the Action Sprint Tour, including a full schedule, points, purses and point fund, visit www.ActionSprintTour.com.
_________________
Action Sprint Tour powered by RaceRivalz.com Race Report
August 3, 2018
Ohsweken Speedway – Ohsweken, Ontario, Canada
Total Entries – 30