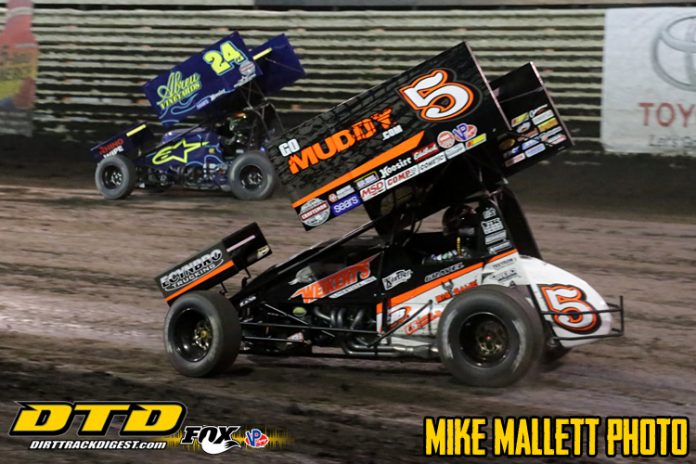 CONCORD, NC – After a month in the Midwest, the World of Outlaws Craftsman Sprint Car Series makes it’s way west for the annual fall swing, featuring nine days of racing over 16 days in Washington, Oregon and California.

The trip begins with the Outlaw Energy Showdown, a two-day event on the high-banked 3/8-mile bullring at Skagit Speedway, Friday, August 31 to Saturday, September 1. Last year, 2015 winner Shane Stewart did a repeat on night one, taking his Larson/Marks Racing No. 2 machine through the checkers. This was the start of a great stretch for Stewart, which he’ll be looking to repeat this season with only one win to his credit.

From there, the Outlaws head to Grays Harbor Raceway in Elma, Washington on Monday, September 3. Last year, Stewart led all 30 laps for his second win at at the high-banked 3/8-mile oval — the first one ten years earlier. Schatz has the most Series wins at the track with four, three of them from 2013-2015. Grays Harbor has been a fixture on the World of Outlaws Craftsman Sprint Car Series West Coast swing since 1996 when Dave Blaney picked up the win in the inaugural visit.

The Series makes its lone appearance in the Beaver State on Wednesday, September 5, as the Outlaws stop at Willamette Speedway in Lebanon, Oregon for the sixth time ever. With wins to their credit, Schatz, Stewart, and track record-holder Brad Sweet will look to honor last year’s winner, Jason The Ragin Cajun Johnson, with a #Forever41 victory.


The Greatest Show on Dirt heads back to California for the second time this season for another battle with the tough locals over five days of racing at three different tracks: the Gold Cup Race of Champions at Silver Dollar Speedway, the newly named 49er Gold Rush Classic presented by Riebes NAPA at Placerville Speedway (which was postponed due to rain in March), and the beautiful Calistoga Speedway for the Wine Country Outlaw Showdown.

Earlier this season, the Outlaws made their way to the West Coast for an extended road trip that consisted of stops in Nevada, California, and Arizona. During that time the Series got hounded by rain, but Schatz and 2017 Rookie of the Year Sheldon Haudenschild each managed to pick up two wins apiece. Meanwhile, Aaron Reutzel and Cory Eliason both managed to fend off the Outlaws to pick up first-ever Series wins.

This time, many fans will also be seeking out Carson Macedo, who scored an upset win over the World of Outlaws Craftsman Sprint Car Series at Silver Dollar Speedway in 2014 and has shown up his skills the last couple of weeks wheeling the Jason Johnson Racing No. 41.

Tickets for the 49er Gold Rush Classic and the Wine Country Outlaw Showdown can be purchased online or by calling 844-DIRT-TIX. See the schedule for information on other West Coast Swing events.

For those that can’t make it to the races out West, DIRTVision.com will have you covered with live videa as the California contingency tries to steal a win from the World of Outlaws Craftsman Sprint Car Series drivers.