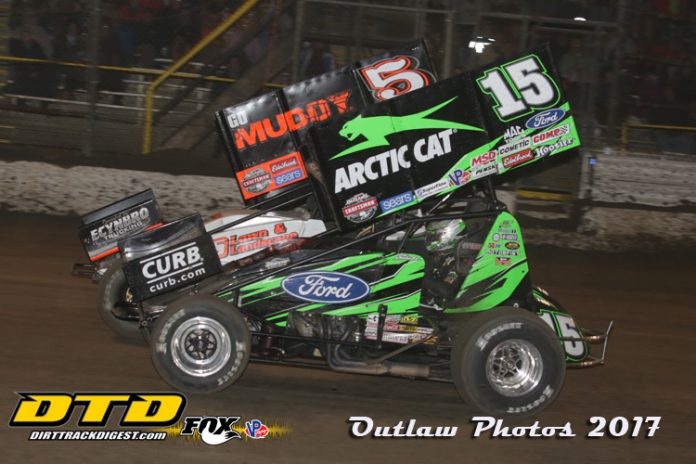 GRAND FORKS, ND — The World of Outlaws Craftsman Sprint Car Series returns to River Cities Speedway in Grand Forks, ND, on Friday, August 17 for their second and final visit of the season with the running of the 2nd Leg of the Gerdau Recycling Northern Tour. Donny Schatz was victorious in the 1st Leg of the Northern Tour in June, earning his 10th World of Outlaws win at the track.

The North Dakota native has won six of the last seven races the series has contested at the high-banked three-tenths-mile. Daryn Pittman, the 2013 World of Outlaws Craftsman Sprint Car Series champion, is also a past winner at River Cities Speedway, taking the checkered flag in 2015.

David Gravel picked up his first win in Grand Forks in 2017. Kraig Kinser is also a former River Cities Speedway winner, with his victory coming in 2012. Schatz leads the current series point standings over Brad Sweet as he chases his 10th title.

Schatz has 15 wins this season, while Sweet has reached victory lane three times thus far in 2018. Gravel is solidly in the third spot in the standings on the strength of five wins. Pittman, who also has five wins, is fourth in the standings, with Shane Stewart rounding out the top-five.

Sheldon Haudenschild and Logan Schuchart are currently tied for sixth in points. Haudenschild is having a breakout season with four wins to date. Schuchart recently picked up his first win of the season in the finale of the Ironman 55.


Ian Madsen, the leading contender for the Kevin Gobrecht Rookie of the Year Award, is eighth in points, followed by Brent Marks, who has two wins in ninth and Kraig Kinser in 10th. Fellow drivers on Outlaws tour again in 2018 include Jason Sides, Jacob Allen and Greg Wilson. Allen led laps at River Cities Speedway in 2017 and has been close on a few occasions this season to scoring his first Outlaws win.

A strong contingent of River Cities Speedway weekly competitors are expected to challenge the World of Outlaws Craftsman Sprint Car Series, led by Mark Dobmeier, the winningest sprint car driver in track history, along with Thomas Kennedy, Austin Pierce, Jordan Adams and Blake Egeland among others.

Also in action during the 2nd Leg of the Gerdau Recycling Northern Tour will be the NLRA Late Models. Ricky Weiss won in June at River Cities Speedway in the 1st Leg of the Northern Tour. Dustin Strand leads the series standings over Brad Seng. Mike Balcaen is third in points, with Shane Edington fourth and Troy Schill fifth.