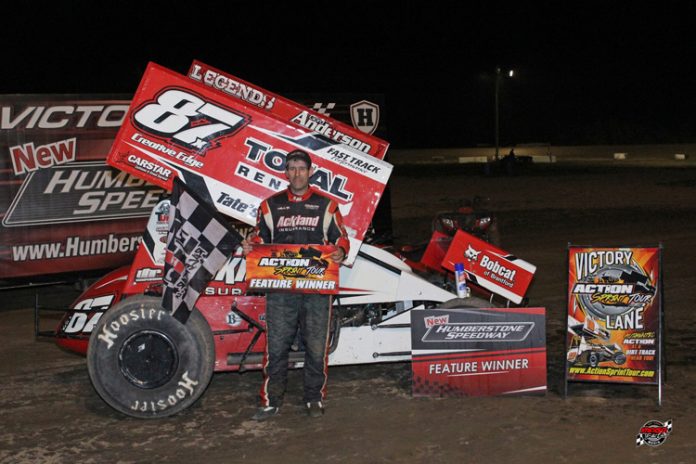 PORT COLBORNE, ONT – Shone Evans took full advantage of his pole starting spot and led all 20 laps on route to another piece of history as the first driver to win three races with the Action Sprint Tour powered by RaceRivalz.com on Sunday night at Humberstone Speedway. Evans also took over the series point lead following the seventh race of the season.

Evans and Liam Martin brought the field to the green flag after both drivers declined the Durnin Motors Front Row Challenge and the chance to earn a bonus $500 if either could win from the 12th starting spot.

Evans jumped out to the early lead while eighth-starting Aaron Turkey, who entered the night third in the standings, was quickly on the move and raced into second by lap three after getting past teenage driver Josh Hansen.

The first caution of the race waved on lap seven when Welland, Ont. native Blaine Barrow slowed to a stop at the top of turn two. On the ensuing restart, Evans and Turkey distanced themselves from the remainder of the field while St. Thomas, Ont. driver Jesse Costa, who entered the night at the point leader, raced around rookie Brandon Murrell for the fourth spot.


Another restart on lap 10 produced largely the same result as Evans and Turkey proved themselves the class of the field once again. They raced away from the field while battling for the lead until a red flag on lap 18 when Hagersville, Ont. native Jerry Hill rolled on his side after contact with Dereck Lemyre. He climbed from his car uninjured.

The first attempt at a green-white-checkered finish did not go as planned and resulted in Costa rolling his No.52 on its side. Costa was assisted out of his car with help from the Humberstone Speedway safety team and Emergency Medical Staff. He was alert and conscious, but was transported to local hospital for further observation and treated for chest and back pain.

After the incident was cleared, Evans completed his dominating night as he held off Turkey over the final two laps to secure his third win of the season. Turkey earned the runner-up spot of Hansen while Port Colborne teenager Jacob Dykstra and Brad Herron rounded out the top-five. Brandon Murrell earned his first career top-10 in a Sprint Car with a sixth-place finish as Steven Beckett, Paul Klager, Ryan Hunsinger and Jordan Hill rounded out the top-10.

The Action Sprint Tour continues its inaugural season on Saturday, August 18 at Brighton Speedway. It is the tour’s first ever stop at the one-third mile track located on the shores of Lake Ontario in Brighton, Ont. Race time is 7:00pm. Additional event information is available at www.brightonspeedway.com. For more information on the Action Sprint Tour, including a full schedule, points, purses and point fund, visit www.ActionSprintTour.com.

The Action Sprint Tour will also make one final stop at Humberstone Speedway in its second-to-last race of the year on Sunday, September 2 before crowning the first champion at Ohsweken Speedway on Friday, September 7.
_________________