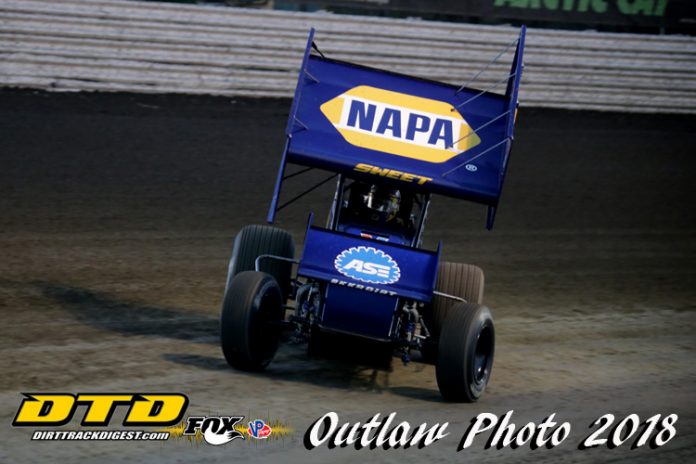 Last year, the series returned to the three-eighths-mile for the first time since 2008, with Daryn Pittman picking up the win. Making the victory even more special was the fact that his team owner, NASCAR driver Kasey Kahne was in attendance, watching the pair of World of Outlaws Craftsman Sprint Car Series teams he owns compete. For Pittman, the 2013 series champion, it was his second win at Big Sky Speedway to go along with a victory in 2005.

Leading the way for the World of Outlaws Craftsman Sprint Car Series this season is nine-time and defending series champion Donny Schatz. The North Dakota native has 15 wins this season, though Big Sky Speedway is one of the few tracks on the schedule where he has never won.

Brad Sweet, who recently scored the biggest win of his career, capturing the $150,000 Knoxville Nationals in Iowa, is currently second in points on the strength of four wins. David Gravel solidly sits in the third position, with five victories to his credit.

Pittman and Shane Stewart are locked in a great battle for the fourth position. Pittman, who also has five wins thus far in 2018, holds the fourth spot, while Stewart, who has one win is less than 60 points behind him.


Sheldon Haudenschild, who is having a breakout season, with four wins, is currently tied for sixth in points, with fellow rising start Logan Schuchart, who recently picked up his first win of the season in the finale of the Ironman 55 weekend at I-55 Raceway in Missouri.

Ian Madsen, the leading contender for the Kevin Gobrecht Rookie of the Year Award is eighth in points. Brent Marks, who picked up his first two World of Outlaws Craftsman Sprint Car Series wins earlier this season, is ninth. Kraig Kinser rounds out the current top-10 in points.

Tickets for the Big Sky Brawl presented by NAPA Auto Parts and Visit Billings, featuring the World of Outlaws Craftsman Sprint Car Series at Big Sky Speedway in Billings, Mont., on Saturday, August 25 can be purchased in advance online at https://slspromotions.ticketforce.com or by phone at 815-344-2023. Tickets can also be purchased at the track on race day.