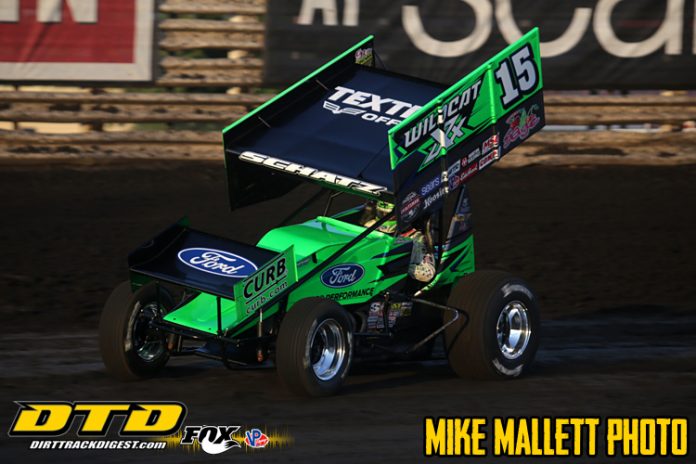 WEST FARGO, ND – Donny Schatz completed the weekend sweep of his home state of North Dakota, taking the lead on Lap 23 to win his 17th World of Outlaws Craftsman Sprint Car Series Feature of 2018 Saturday night at Red River Valley Speedway. Jacob Allen finished second as he continues to close in on his first career Outlaw win with Kerry Madsen completing the podium for the second consecutive night.

David Gravel won the Sears Craftsman Dash to the earn the pole for the 30-lap Feature alongside Shane Stewart. Gravel got the jump on the initial start and led the opening circuit. Jacob Allen worked his way forward from fourth to take second away from Donny Schatz on Lap 5 and two laps later Allen got by Gravel to take command of the field.

Allen led for four laps before bobbling in lapped traffic, trying to split a pair of lapped cars, on Lap 12, allowing Gravel to steal the lead back and Schatz to move into second. The trio captivated the large Red River Valley Speedway crowd as they jockeyed for the lead.

Gravel worked his way through traffic, before the first caution of the event flew for Thomas Kennedy, who ended up backwards in turn one after battling with Sides for sixth with 18 laps complete.

Allen edged back in front of Schatz on the restart, but Schatz slid the young Hanover, PA native to take second back at the line. A lap later, Ian Madsen slowed with a flat tire, ending his top-ten run. Brad Sweet also headed pit side with a flat tire.

With tires going down, the decision was made to go with single-file restarts the rest of the night, which allowed David Gravel to steadily lead with 11 to go. Schatz reeled in Gravel with a big run off of turn two and shot underneath him down the backstretch to take the lead on Lap 23. As it turns out, Gravel was nursing an ailing tire as he slowed with a flat right rear the next lap, bringing out the final caution of the evening.

Allen stayed right with Schatz on the restart and looked for a way around the nine-time Series Champion, to no avail. Schatz hit his marks, didn’t make any mistakes and went on to win his 17th Feature of the season and extend his points lead.

When asked about what it means to win in front of his hometown crowd, Schatz kept it simple, “It’s what you live for. You hope when you roll near home to put on a good show, have some good runs and win some races.”

“I’m so fortunate for my team, they are the reason I’m standing here. We’ve been together for a long time and we have a lot of fun doing this,” Schatz added before thanking the track crew for their efforts to provide a multiple-groove racing surface and the large crowd for coming out and supporting.

Jacob Allen continues to impress, finishing second and while he was a little disappointed to not seal the deal, he was still pleased with the run.

“Donny is a legend and to compete with him for a win was a lot of fun. I’ve ran second quite a few times this year and I want to win one so bad. One of these days, I’m going to bag on,” Allen said convincingly.

For the second consecutive night, Kerry Madsen completed the podium and was in good spirts. “I’ve always loved coming up here [to North Dakota]. My team works really hard and we’re happy with two podiums this weekend,” Madsen said before thanking the fans for coming out, letting them know his appreciation for the racing support in the area.

Greg Wilson was humming on the bottom of the speedway and charged from 13th to fourth. Logan Schuchart went up in smoke in his Heat, relegating him to the Last Chance Showdown, which he won with ease. Schuchart charged from 19th to complete the top five in the Feature, earning KSE Hard Charger Honors.

The World of Outlaws Craftsman Sprint Car Series continues its 40th Anniversary Season with a return to the Black Hills Speedway in Rapid City, SD next Friday, August 24 before making the trek over to Big Sky Speedway in Billings, MT on Saturday, August 25. If you can’t make it to the track, watch all the action LIVE on DIRTVision.com!