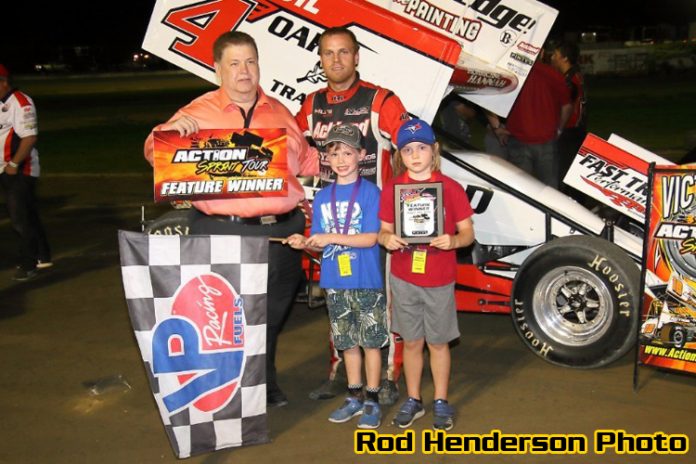 BRIGHTON, ONT – Mack DeMan didn’t hold back at all in his return to Crate Sprint Car racing as the Mississauga, Ont. native started on the pole and led all 20 laps to earn victory with the Action Sprint Tour powered by RaceRivalz.com at Brighton Speedway on Saturday, August 18.

Although it was DeMan’s first career start with the Action Sprint Tour, the veteran racer is no rookie as he is the all-time Crate Sprint Car wins leader at Ohsweken Speedway and recently graduated to become a 360 Sprint Car racer. DeMan also became the fourth different winner in 8 series races this season. DeMan was driving for his former full-time car owner, Daren Barr.

“It’s super cool,” DeMan said of the win in Victory Lane. “There’s so many talented drivers in this division. Jacob Dykstra and Shone Evans, these guys are going to be putting on a show in a 360 soon.”

“The track really changed tonight,” DeMan continued. “The bottom was quick early, but then the No.87x was on the outside and Dykstra was up there too. So I had to go try it too. It’s just a great win for the Barr family. This was my first time ever racing a dirt track that I like more than Ohsweken. What a great little bullring, great facility and the track prep was great. It was just a fantastic night all around.”

A fantastic crowd was on hand at Brighton to watch DeMan and Holly Porter bring the 18-car field to the green flag after both drivers declined the Durnin Motors Front Row Challenge and the chance to earn a bonus $500 if either could win from the 12th starting spot.


On the initial start, teenager driver Liam Martin of Binbrook, Ont. made contact with the outside wall and suffered damage to the car’s right front, ending his night. DeMan established a lead again on the restart with Porter and third-starting Jacob Dykstra giving chase.

The second caution of the race came on lap eight when Fonthill, Ont. driver Steven Beckett made contact with an implement tire which resulted in a broken left-front and ended his race early. DeMan was again the point man on the ensuing restart while Holly Porter maintained second, but with a narrow advantage over Shone Evans, who took third on the restart and quickly entered the battle up front after starting sixth.

On lap 14, Evans made his move on Porter to take the second spot and set out to track down DeMan while Dykstra and Hannah Ferrell raced in the top-five. The third and final caution came with 18 laps completed when Brian Nanticoke ended up facing the wrong way in turn four. Ferrell also took her Barr Motorsports No.4 pit side during the yellow, ending her race two laps shy of the scheduled distance.

The green-white-checkered finish produced an epic finish between DeMan, Evans, Porter and Dykstra. Restarting in fourth, Dykstra raced past both Evans and Porter to take second on lap 19. DeMan managed to hold off the fury of action behind him to score the victory, while Dykstra earned the runner-up spot ahead of Evans, Porter and Aaron Turkey.

Earlier in the night during heat race action, local pilot Brandon Murrell came together with Dereck Lemyre in turn four, resulting in Lemyre’s No.56 rolling on its side. Lemyre’s Burger Barn Racing team was able to replace the top wing and compete in the Feature event. 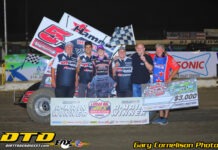