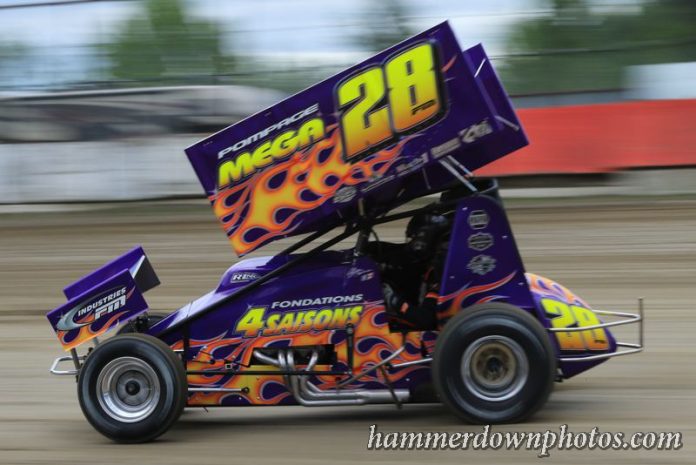 GRANBY, QUE – Steve Poirier now has 70 career wins on the Lucas Oil Empire Super Sprints (ESS) tour which puts him atop of the all-time win list with the club celebrating its 35th Anniversary. But, when the Quebec native puts his familiar #28FM into victory lane as he did Friday night at Autodrome Granby it always means a little bit more.

The seven-time champion admitted he was a bit lucky when leader Shawn Donath dropped out with engine woes just after halfway. He kept a high flying Matt Tanner at bay to get the win in front of a huge crowd that filled the big grandstands. The Mach 1 Chassis A-Main that also awarded points towards the 1000 Islands RV Centre Canada Tour and the Fondations 4 Saisons Quebec Tour was worth $2,235.

“I don’t know if I could have caught Shawn (Donath), his car was just so fast,” Steve said shortly afterwards, “I was going to need lapped traffic to help me try to get by. Cautions wasn’t going to help as my motor was stumbling bad on restarts.”

After starting in fourth, Poirier worked his way to second and began the chase on Donath. “The track was real fast tonight so I knew even starting in fourth it would be tough to get a win as everyone was fast tonight,” Poirier continued, “We got up to second and was trying different ways to close on Shawn but I think this was going to be his win, then he had troubles and we were a little lucky on that.”

For Poirier, there’s nothing like winning at home. “Yea, it means a lot. We only come here two times a year so a lot of my friends don’t get to see me as much as my modified days,” Steve said on his special victories in Quebec, “They get to follow what we do on Facebook and Twitter but they aren’t at the track so when they see you finish fourth of fifth some nights they don’t know why. When you win at home it makes them happy also.”

Matt Tanner has slowly crept into the ESS championship hunt and another runner-up finish didn’t hurt his late season run. “We just have such a good set up on the bigger tracks and we have been getting good finishes,” said the happy driver of his #90, “We just have a few of the short tracks to get down now and I think we have a good package,

“To finish on the podium with guys like Steve (Poirier), Jason (Barney), Coleman (Gulick) and others you know you are getting there,” Matt went on, “We will keep digging and see what where we can finish in the points and we know we will have something to work on for next year.”

On this night, Tanner was echoing some of the same words as Poirier, “We needed some traffic and I think a late caution if we were going to get Steve,” he went on, “I know we were as fast as he was as he wasn’t pulling away but we needed some help, but still a very good run.”

Jason Barney started 14th and clawed his way to a third place finish and more importantly get as many points as he can to keep Poirier behind him in the championship fight. “We didn’t change anything on the car all night, we had a plan and it was working there at the end,” he said, “The track was so fast in warmups so time trials was such a crap shoot, we missed it a bit but we just kept at it and got third here in the end.”

Alex Vigneault took a fine fourth with Matt Billings backing up his strong run at Brockville with a fifth. Rounding out the top ten were Paul Kinney, Coleman Gulick, who rebounded from a flat tire, Billy VanInwgen, Chad Miller and Dave Axton.

A total of 24 cars in the pits for the first of three days in Quebec.