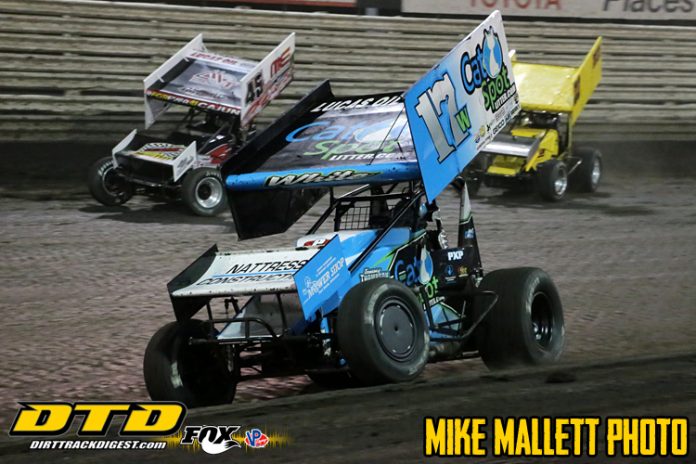 TULSA, OK – Sprint Car fans will have plenty to choose from this Labor Day Weekend as nine events across five sanctions of the American Sprint Car Series are set to do battle.

Slated for action in Arizona, Missouri, Montana, and Texas, the ASCS Frontier, Gulf South, and Southwest Regions will be on track along with the Lucas Oil American Sprint Car Series presented by Sawblade.com, in conjunction with the ASCS Warrior Region.

Eight previous visits by the Lucas Oil American Sprint Car Series presented by Sawblade.com to Lake Ozark Speedway, five drivers garnered wins with Shane Stewart going back-to-back in 2004, followed by Jesse Hockett in 2005 with two wins to his credit. Earning his lone ASCS National win in 2008, Aaron Berryhill topped the action in May 2008 with Jason Johnson winning in July that year during the Daniel McMillin Memorial. Jason won the second McMillin Memorial event in 2009, with Zach Chappell putting his name on the list of winners in 2010.

Going into the weekend double-header the chase for the 2018 National Tour Championship has tightened up as the top three are separated by 77 points with Sam Hafertepe, Jr. leading the charge over Seth Bergman and Blake Hahn. The top-five rounds out with Wayne Johnson and Johnny Herrera.

The 25th Montana Roundup at Electric City Speedway encompasses three nights of racing and is one of the most highly anticipated events for drivers across Montana, South Dakota, Wyoming, Canada, and beyond. Kicking off Friday, August 31 and running through Sunday, September 2, the trio of events are complete shows that pay $1,500 to win each night which caps off the 2018 season at the Great Falls, Mont. oval.

One year ago, the ASCS Gulf South appearance was a single day affair with Ray Allen Kulhanek taking the win. Prior to that, the series graced the clay of the quarter-mile oval in 2013 with Aaron Reutzel grabbing the win.

Working past the hottest days of the year, the ASCS Southwest Region will fire back up this Saturday, September 1 and Sunday, September 2 at Show Low Raceway Park. Located in the cool pines of Show Low, Ariz.

The second half of the 2018 season, nine events leading up to his weekend’s event has found six different winners with Colton Hardy leading the charge with a trio of wins. Going into the two-day affair, the point’s battle is as tight as ever as the top-five are only separated by 80 points, with the top four going into the weekend with a 13-point gap between Billy Chester, Jesse Baker, Josh Shipley, and Rick Ziehl.

The last visit to Show Low Speedway Park was in May 2013 with Rick Ziehl picking up the win.

Saturday, September 1 and Sunday, September 2 open at 5:00 P.M. with racing getting underway at 7:30 P.M. (MT). The weekend will also include Modifieds, Micros, Pure Stocks, and Bombers. Show Low Speedway Park is located at 4701 E Deuce of Clubs, Show Low, AZ 85901. More information on the track can be found by calling (928) 298-1003 or online at http://www.showlowspeedwaypark.com.