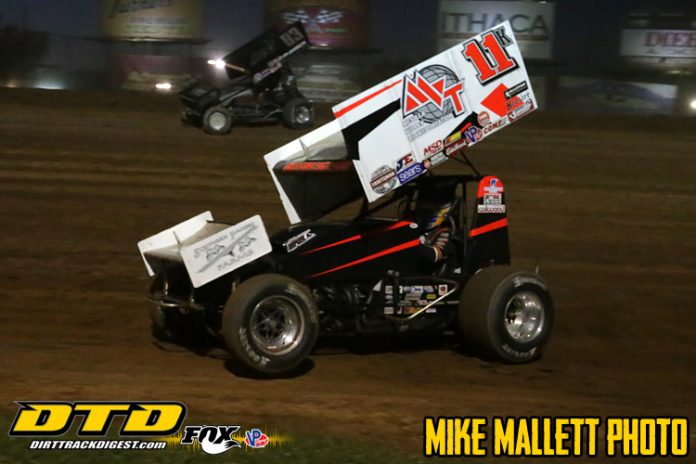 CONCORD, NC – The World of Outlaws Craftsman Sprint Car Series will make its lone appearance in the Beaver State on Wednesday, September 5 at Willamette Speedway. Wednesday will mark the Series’ sixth-ever visit to the high-banked 3/10-mile oval in Lebanon, OR. The late Jason Johnson won a competitive race at Willamette in 2017, edging Daryn Pittman and Shane Stewart in an exciting three-car battle.

All three drivers led during the 30-lap Feature, with Johnson taking the lead for good at the halfway point. The man who was quietly strong all night and finished fourth at the night’s end was veteran Outlaw Kraig Kinser. Kinser set fast time over the field in 2017 with a blistering lap of 11.807 and is looking forward to returning to the facility in 2018.

“It’s always good to go back to a place where you’ve run well. We know we have what it takes to run well at Willamette, so we just need to go out and execute,” the Bloomington, IN native said anticipating a return to Oregon.

Kinser, the son of Sprint Car racing legend Steve Kinser – the all-time wins leader in World of Outlaws history — has been a staple on the Outlaw tour the past decade and owns 17 career feature wins. His family owned No.11K team is still looking for its first triumph of 2018, but they’ve been picking up speed lately, including a top-five finish at the Kings Royal in July.

“We’ve been getting a little better here lately, but we need to be more consistent. We’re not happy where we are right now, and we’re working to get where we need to be,” Kinser said honestly of his 2018 Season.


Donny Schatz (2016) and Shane Stewart (2014) are the current full-time Outlaws with wins at Willamette Speedway in their career. Popular California drivers Dominic Scelzi and Rico Abreu, along with a handful of Pacific Northwest locals, will join the 13 full-time drivers at Willamette on September 5, 2018.

Tickets for The Greatest Show on Dirt’s lone appearance in Oregon are still available online. If you can’t make it to the track, be sure to watch all the action LIVE on DIRTVision.com!