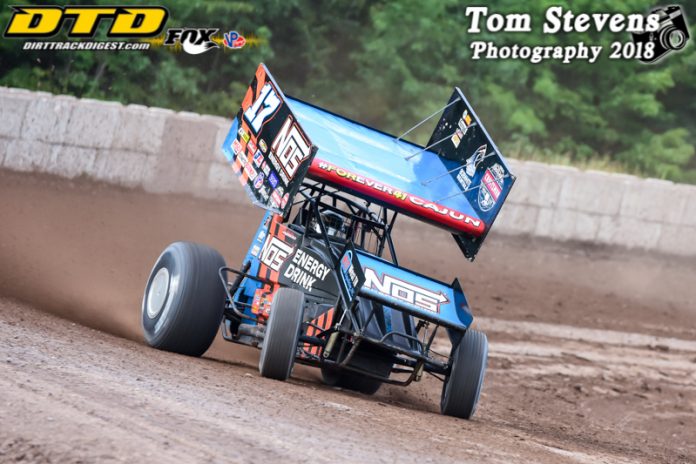 ALGER, WA – Sheldon Haudenschild celebrated his 25th birthday in style, sliding Shane Stewart for the lead coming to the White Flag on Night One of the Outlaw Energy Showdown at Skagit Speedway to win his 5th World of Outlaws Craftsman Sprint Car Series Feature of 2018. Stewart did everything in his power to get back by Haudenschild but settled for second in the thrilling finish. Rico Abreu completed the podium in his first Outlaw start at Skagit.

California fan favorite Rico Abreu won the Sears Craftsman Dash, earning the pole for the 30-Lap Feature alongside Shane Stewart. Abreu got the jump on the initial start to lead the opening lap before action was halted for a backwards Jacob Allen, who spun to avoid a logjam of cars with one lap complete.

Abreu chose the bottom on the ensuing double-file restart and led the field down the backstretch but Shane Stewart, a two-time Outlaw winner at Skagit, got a massive run on the cushion off of turn four to lead Lap 2. As Abreu searched around the race track, Sheldon Haudenschild snuck by into second on Lap 4 and began closing in on Stewart.

Stewart and Haudenschild gave the Skagit Speedway fans a glimpse of what was to come on Lap 7 as Sheldon got underneath Stewart to lead down the backstretch, only to have Stewart blast back around to lead the lap at the line by a hair.

The intense action halted on Lap 10 when Keoni Texeira spun to a stop. On the opposite end of the track, Jason Solwold’s eventful evening continued as he stopped with a flat right front tire. Solwold would return, but Texeira would not.

The ensuing double-file restart saw contact in the back of the pack and Austen Wheatley end up in the infield with damage that would end his evening. Following that, the decision was made to conduct single-file restarts the rest of the evening.

Lap 13 saw Solwold’s night go from bad to worse as his No.18S went end-over-end down the backstretch into turn three after incidental contact with Jacob Allen. Solwold walked away from his mangled car under his own power.

The remaining 17 laps went Green-to-Checkered and they did not disappoint. Haudenschild hawked the veteran Stewart through heavy lapped traffic, keeping the crowd on the edge of their seat as the drivers navigated a tacky racing surface.

Haudenschild looked to be within striking distance multiple times, but remained patient until the perfect opportunity, which came on Lap 28. Stewart bobbled ever-so-slightly on the treacherous cushion off of turn four, opening a narrow window for Haudenschild to pounce and the young Wooster, OH native did just that.

Haudenschild threw his NOS Energy Sponsored, Stenhouse Jr.-Marshall racing No.17 hard into the corner and inched in front of Stewart at the edge of turn four. Stewart and Haudenschild made slight contact after the slide job but both drivers kept going under the White Flag. Stewart tried one last ditch effort to get the lead back coming to the checkered, but to no avail as he would finish .311 behind Haudenschild in an exciting Feature.

“I knew I was running out of time and had to make something happen. I don’t think my slider was dirty, you kind of had to stop his momentum to pull it off. I know he bumped by back bumper, but on a small track like this, I think you’re going to have some wheel-banging and the track tonight was beautiful,” Haudenschild said in Victory Lane.

Shane Stewart despite the tough finish remained in good spirits, “I thought we were going to have one, I knew Sheldon was going to be tough. I thought I was getting through lapped cars pretty good, but I jumped the cushion just a little bit coming to the White and allowed Sheldon to get a good run on me. That’s how these races go, you can’t stub your toe, can’t slow down at all or you’re going to get passed.”

Rico Abreu, who has been following the Outlaws back to his home state of California since Knoxville, came home third in his first Outlaw start at Skagit. “This place races great. I didn’t get to the top soon enough on that restart and that’s where we lost the race. My car was perfect and I’m excited for tomorrow,” an upbeat Abreu said.

Though it was Sheldon Haudenschild’s fifth win of the 2018 Season, it was his first since Fairbury back on June 5th. “To get a win after not winning for a while feels really good. I can’t thank Ricky [Stenhouse Jr.], the Marshall family, our sponsors and my crew guys enough,” Haudenschild added in Victory Lane.

Washington’s own and former World of Outlaws Craftsman Sprint Car Series regular Jason Solwold had a night he will certainly never forget, for all the wrong reasons. Solwold set Quick Time over the field, only to have a water pump issue on his team’s only 410 motor. The team was forced to change to their 360ci engine for the Heat Race, where he fended off numerous charges to finish second to advance to the Dash. While that was ongoing and during the intermission and dash draw, Solwold and the team successfully scrambled to fix the water pump issue on the 410 in time for the Feature. All for the Burlington, WA native to get a flat tire 10 laps into the Feature while running eighth and go for a wild ride down the backstretch three laps later. Fortunately, Solwold was uninjured in the accident, but the rest of his weekend remains in jeopardy.

The World of Outlaws Craftsman Sprint Car Series continues its 40th Anniversary Season back at Skagit Speedway Saturday, September 1, 2018 before heading over to Elma, WA on Monday, September 3 for an appearance at the Grays Harbor Raceway. If you can’t make it to the track, be sure to watch all the action LIVE on DIRTVision.com!