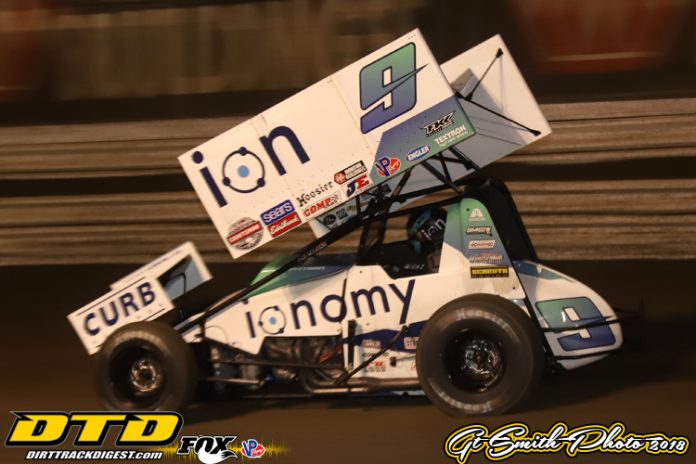 ALGER, WA – Daryn Pittman led all 40 laps to score his 7th World of Outlaws Craftsman Sprint Car Series victory of the season on the second night of the Outlaw Energy Showdown at Skagit Speedway. Donny Schatz and Brad Sweet exchanged the runner-up position multiple times in the closing stages with Schatz grabbing the position and Sweet settling for third.

Pittman won the Sears Craftsman Dash to earn the pole of the 40-lap Feature, alongside Schatz. Pittman controlled the initial start and led the opening lap as Schatz and Logan Schuchart jockeyed for the runner-up position before a Red Flag halted action. A handful of slowed cars littered the racing surface, resulting in Dominic Scelzi getting upside down. Scelzi was alert and talking to the safety crew but was transported to the local hospital with a hip injury.

Friday night’s winner Sheldon Haudenschild spun to a stop on Lap 3, ending his top-ten run and bunching the field back together. The next 10 laps allowed the leaders to delve into lapped traffic. With the preferred racing line up on the cushion, Pittman was able to methodically work his way through traffic efficiently with calculated slide jobs.

Buddy Kofoid’s good run came to an end on Lap 13, when he stopped in turn one. On the ensuing restart, Brad Sweet went to work on Schuchart, as the duo exchanged slide jobs for third. Schuchart resisted, but Sweet was able to wrestle the position away for good on Lap 15 and began to close in on Pittman and Schatz.

As lapped traffic picked up, Pittman was forced to slow his pace around the cushion, allowing Schatz and Sweet to knock on the door. The best racing action of the night came on Lap 27 through 30 as Pittman remained committed to the top, Schatz found some traction on the bottom and Sweet was looking for a way around both of them. The trio were within inches for the better part of those laps, exciting the large Skagit Speedway crowd.


Donny Schatz bobbled on the tricky cushion off of turn two on Lap 31, allowing Sweet to steal the runner-up position and, more importantly, allow Pittman to extend his advantage. Sweet began to close in on his Kasey Kahne Racing teammate, potentially setting up another nail-biting finish. Although, unlike last night, this time the battle was for second, as Schatz and Sweet waged war in lapped traffic, ultimately allowing Daryn Pittman to pull further away and pocket the $12,000 payday at Skagit Speedway for the second consecutive year.

“My guys did a good job. Glad to get the Adams family a win, Justin lost his Grandfather the other day and he’s been doing a great job for us this year, so this one was for him,” Pittman said sincerely in the Victory Lane. “It’s great to get another win, you cherish every one of this because you never know when your next one is going to come,” Pittman, who collected his 79th career Outlaw win, added humbly.

“I am so grateful to have my family here and that they can travel with me. I’m far from my home but there’s obviously a lot of Kasey Kahne fans here in Washington, so I’m glad to get this win for him,” Pittman said to a large cheer from the crowd.

When asked about his game plan starting on the front row, Pittman was honest. “My plan was if the 15 got under me, I better get my butt in gear,” the Owasso, OK native said with a smile.

Schatz got back by Sweet coming to the White Flag and held on for second. “It’s not where anyone wants to be, but you have to take it some days,” Schatz said of his runner-up finish. “40 laps is 40 laps, I felt like I needed it to be 100 laps to win tonight,” the Fargo, ND native added with a grin.

Brad Sweet came home third and talked about the three-car battle for the lead. “It was a good battle, I was trying to give it all I’ve got, I thought we had a really good car. It’s a little disappointing to give that spot back to Donny on the last lap, but still a good run for this team and to end the weekend on the podium is nothing to be ashamed of,” Sweet said in good spirits.

Logan Schuchart was strong all evening and finished fourth, with Ian Madsen completing the top-five in his second-ever weekend at Skagit Speedway.

The World of Outlaws Craftsman Sprint Car Series continues its West Coast swing and 40th Anniversary Season with a return to the Grays Harbor Raceway in Elma, WA on Monday, September 3rd before the Series makes its lone appearance in Oregon on Wednesday, September 5th at Willamette Speedway. If you can’t make it to the track, be sure to watch all the action LIVE on DIRTVision.com!