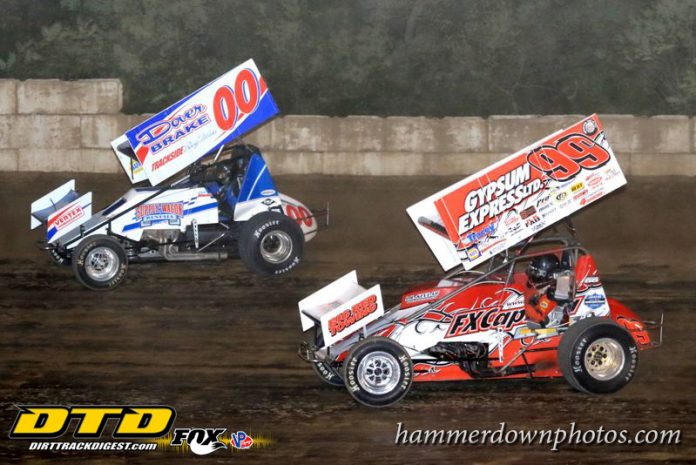 FULTON, NY – In what will go down in history as one of the closest finishes ever with the Lucas Oil Empire Super Sprints, Larry Wight secured a last lap, last turn pass to beat out Billy VanInwegen and Danny Varin. The Phoenix, N.Y., driver needed all 25-laps to get it done as the margin between the top three was a mere .075 of a second.

What made the win even more remarkable is Wight lost a valve on his primary motor during his heat race. The team went back to the shop and got a second motor. They completed the change as the B-Main was pushing off. Wight started near the tail of that event and won it in dominant fashion. From there he worked from 19th starting spot to secure his first ever Empire Super Sprint feature win at Fulton Speedway, in the NAPA Auto Parts, Mach 1 Chassis feature event.

“We had a phenomenal car,” stated an ecstatic Wight. “This car has been really good, but we haven’t been able to catch the breaks. In the heat race we dropped a valve. We sent dad down the road to grab the motor and we changed it just in time to make the B (Main). It went good so we knew we had a car. We definitely earned this one.”

VanInwegen and Poirier brought the 26 car field up to speed from the front row. VanInwegen jumped out on Poirier to take the lead as they exited turn two. Poirier wasn’t far behind as he kept VanInwegen close.


The duo battled at the front changing lanes with each trying to find an advantage over the other. On lap six they come off of the third turn side-by-side at the line with VanInwegen remaining the leader.

Two laps later VanInwegen got his first taste of slower cars at the back of the field. He stuck with his line allowing him to keep Poirier behind him with Jonathan Preston as well as Jason Barney entering into the mix. VanInwegen was slowed by traffic, but no one behind him was able to capitalize.

VanInwegen and Poirier kept up their battle with a pause coming on lap 11 for a red flag. Dan Douville got over in the middle of turns three and four. Thankfully he exited the car uninjured. By this point in the race Wight had made his way up inside the top ten.

Like the original start, Poirier pulled up to the outside of VanInwegen. As was the case on the opening green, VanInwegen again got the jump on Poirier. This time he was able to put to put a small gap between himself and Poirier as he was forced to contend with Barney and a charging Varin.

Varin took the third spot from Barney then a few laps later took the second spot from Poirier. His full attention was then put on tracking down VanInwegen. As the lap counter clicked 20 is was VanInwegen in traffic fending off Varin with Wight up to fourth.

Wight made the most of the leaders being in traffic as he quickly closed in on the top two. As they crossed the start-finish line with two laps to go it was a three car race for the win. VanInwegen continued to keep both Varin and Wight at bay.

The final lap saw VanInwegen work the high lane in turns one and two while Wight and Varin tucked low in the midst of traffic. Wight was able to get around Varin off the exit of turn two. He got a great run off the corner allowing him to dive to the inside of VanInwegen going down the backstretch.

Wight had the preferred lane way down on the bottom of the speedway on the entrance to turn three forcing VanInwegen in the middle. Varin went for broke on the outside. As they raced through turns three and four Wight got just enough of a run to sneak by VanInwegen off the exit of the turn and to hold off Varin at the line.

“He (VanInwegen) was missing the bottom in three and four and me and Danny could just eat him up,” cited Wight. “The lapped car got in the way and he wasn’t sure which way that lapped car was going to go. He left just enough of a hole.”

VanInwegen was obviously disappointed as he came so close to capturing his first ever feature victory with the series. He’s been constantly improving as the season has progressed including four top five finishes in his last seven races.

“I’m probably going to lose a lot of sleep and probably have to drink a lot of beers to shake that one off,” said VanInwegen. “Larry ran an awesome race to come from the B like that. I had the time of my life racing Steve Poirier like that. I thought I would be chasing him for 25-laps, but to get to race like that with him in lapped traffic is nothing to hang our heads about. It’s truly a learning year for us out here, but I think we are getting close. Hopefully I can close one of these out someday.”

Varin indicated that he wasn’t going down without a fight. The high-side of turns three and four wasn’t the most ideal lane to be in on the speedway, but the Fonda, N.Y., driver nearly made it work just enough to get the win.

“I was trying to go where he (VanInwegen) wasn’t,” commented Varin. “There just wasn’t an exit off the top of four. It was kind of killing me. I stuck with it. I thought I was going to get him. I threw a couple sliders at him then Larry (Wight) peaked his nose in there the last lap. I don’t think anybody touched a wheel, that’s how great these drivers are. It kind of sucks, we wanted to win it tonight. It was a good race.”

Poirier ended up falling back to finish in the fourth position while Barney came to the checkers in fifth.

A total of 31 sprints made up the pit log.