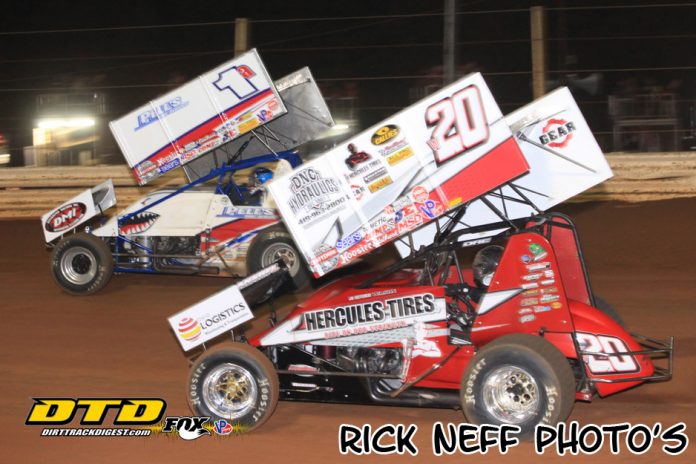 CONCORD, NC – The crown jewel of the World of Outlaws Craftsman Sprint Car Series Fall West Coast swing, the 49er Gold Rush Classic at Placerville Speedway, is fast approaching. Mother Nature spoiled the Outlaws’ plans at Placerville back in March, but she looks to be out of the picture next weekend when the Greatest Show on Dirtand the tough California locals invade the high-banked quarter-mile oval on Wednesday, September 12th in pursuit of a $20,000 pay day!

Brad Sweet, who has promoted this event the past three years, is thrilled to have this event come to fruition. “California loves Sprint Car racing. The dedicated fans and great racers deserve a bigger payday, and the area has been deprived of it for the past few years. We want larger paying events, and we are excited that we are able to step up and create an event like this,” said the 2018 Knoxville Nationals Champion, who hails from Grass Valley, CA.

“The reason for changing the name is gold was discovered less than 10 miles from the race track in 1849 by the miners known as the 49ers. It seemed fitting to change the name to the 49er Gold Rush Classic and add nine more laps for the drivers in search of the $20,000 prize,” Sweet added.

Thanks to Bart Riebe with Riebes/NAPA AUTO PARTS, Chris Meyer of High Sierra Industries and a hoard of other local sponsors throughout the Placerville area, the 49er Gold Rush Classic is able to make this massive purse increase throughout the whole field. The 49-lap event is the highest paying single-day 410 Sprint Car race in California and will pay $20,000 to win and $1,000 just to take the Green.

“California deserves bigger racing events, and we have overwhelming support from our local sponsors,” Placerville Speedway promoter Scott Russell said. “We are glad to have this event become one of the premier races this year and hopefully grow in the future as well.”

The on-track action will be heart-pounding, but the party off the track will get underway the night before on Tuesday, September 11th. A hauler parade through historic downtown Placerville will begin at 5:30pm, which will be followed by a concert at 7pm featuring Tim Dugger, who most recently thrilled race fans Saturday night in Knoxville after the Nationals.

With the 49er Gold Rush Classic falling on a Wednesday, NASCAR star and World of Outlaws car owner Kasey Kahne will be in attendance and serve as the Grand Marshall for the event. Additionally, although nothing is set in stone, Kyle Larson has indicated on social media that he would love the opportunity to compete in the event.

Reserved seating is still available online for the 49er Gold Rush Classic at Placerville Speedway. Additionally, Brad Sweet is bringing in more pit area sitting than ever before as well. Get your tickets today for what promises to be a can’t miss event.