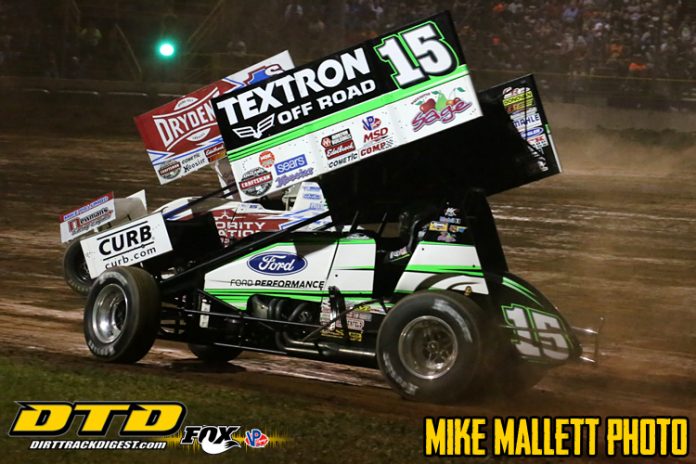 LEBANON, OR – Donny Schatz won for the second time in 48 hours, passing Logan Schuchart on Lap 14 to win his 19th World of Outlaws Craftsman Sprint Car Series Feature of 2018 Wednesday at Willamette Speedway in the Series lone visit to Oregon. Schuchart, who passed Schatz on Lap 4 and led 10 laps, settled for second with David Gravel completing the podium.

Overcoming a mediocre Qualifying effort, Schatz was able to come from fourth to second in his Heat Race to earn a spot in the Sears Craftsman Dash. Schatz drew the one for the Dash and won it to earn the pole for the 30-Lap Feature, alongside David Gravel.
Schatz got the jump on the initial start and led the opening lap. Logan Schuchart and Shane Stewart fought their way to second and third, with Gravel getting shuffled back to fourth. Brent Marks came to a stop on Lap 2, bringing out the caution and setting up a double-file restart.

Schatz chose the bottom and stayed committed down there as Schuchart got a run to his outside. Schuchart used a big surge off the cushion of turn four to lead the fourth circuit.
Schuchart reached lapped traffic on Lap 9 and negotiated it well, but Schatz stayed right with him. Schatz continued to stalk Schuchart through traffic.

Schuchart followed the slower car of Willie Croft on the bottom into turn one on Lap 13 and then slipped up on the bottom off of turn four and that was all the nine-time Series Champion needed to steal the top spot back and lead Lap 14.

A long Green Flag run allowed Schatz to show his prowess in lapped traffic as he built a sizable advantage over Schuchart. Behind Schuchart a slew of cars were littered across the racing surface, waging war for third through sixth.

Ian Madsen brought out the Yellow Flag with 26 laps complete and four laps to run, giving Schuchart and company one last chance to get Schatz for the win. Schuchart followed Schatz into turn one on the bottom and tried to get a run off of turn four to no avail, as Schatz powered away and won by 1.804 seconds for the 19th time in 2018.

“I was a little evil early, I was trying to burn off the fuel and the more I did, the better I got. My car was really good, hats off to my guys, they are the ones that should be standing here,” Schatz said of his Tony Stewart Racing No.15 crew.

When asked about the long Green Flag run, Schatz said, “That’s what you live for when you are running second, or when you are leading. If you can get out front and you do the right things in lapped traffic, you know it.”

“There were a lot of grooves out there, a top, a bottom and a middle sometimes. Hats off to the track crew for providing an excellent race track,” Schatz, who also won at Willamette in 2016, said of the racing surface.

Schuchart settled for second and wasted no time complimenting Schatz. “Props to the 15 team, they do a great job every night and Donny drove a great race. Second-place is still pretty good and this Team Drydene, Shark Racing No.1S is really fast right now. I’m proud of where we are at,” Schuchart said with confidence.

After starting on the front row David Gravel fell as far back as sixth before finding speed on the top side of the racing surface to surge back to third. “We tried to run the bottom early and I went backwards so I had to move up and make some of that ground back up. It’s good to be on the podium, but when you start up front you want to get some wins. Hopefully we can keep this momentum going,” Gravel said next to his CJB Motorsports No.5 machine.

The World of Outlaws Craftsman Sprint Car Series will return to California this weekend at Silver Dollar Speedway in Chico, CA with the running of the Gold Cup Race of Champions. Saturday’s Feature will pay $15,000 to win. Wednesday, September 12 the Outlaws stop at Placerville Speedway for the 49er Gold Rush Classic, which will pay $20,000 to win and $1,000 to take the Green. As always, if you can’t make it to the track, be sure to watch all the action LIVE on DIRTVision.com!