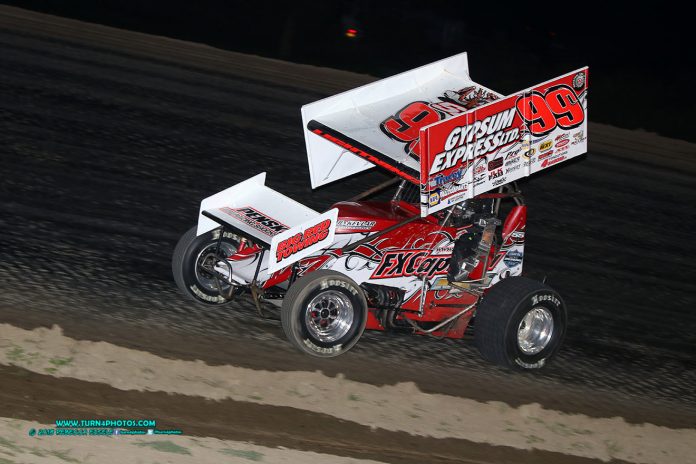 LAFARGEVILLE, NY – Larry Wight had a much easier time picking up the win in Saturday night’s Lucas Oil Empire Super Sprint feature event at the Can-Am Speedway than his one last weekend where he came from the 19th starting spot.  The Phoenix, N.Y., driver started on the pole and led all 25-laps of the E&V Energy, Mach 1 Chassis, and NAPA Auto Parts sponsored main-event for his second consecutive series score.

Wight got the lead right at the drop of the green flag with both Shawn Donath and Matt Tanner eventually attempting to wrestle the win from him.  He also contended with traffic throughout much of the non-stop feature.  At the end of the race, it was Wight standing in victory lane for his fourth career series triumph.

“We definitely got a good draw from Scotty (Jeffery) on getting the pole,” commented Wight afterwards.  “The car was really good.  We did some work to it to get it better than it was in the heat race. All the changes seemed to go the right way.”

Wight was flanked by Donath for the start of the third and final event at the Can-Am Speedway for the 2018 season.  Wight used the inside groove to blast away from Donath at the green flag to lead the field through turns one and two.  Donath tried the middle lane off the exit of two, but there wasn’t enough to challenge Wight.

As Wight and Donath worked one another over for the top spot, Tanner was working his No. 90 up through the field after starting in position seven.  He took over the third spot on lap seven before setting his sets on the top two.

Traffic came into play as the race reached lap 10.  Wight was careful as Donath was lurking back in second looking for an opening.  Wight’s pace was impeded as he had several slower cars to contend with.  Wight was trying to be careful which allowed Donath to stay close.

As they came to the halfway point on lap 13 Wight bobbled coming off the fourth turn.  This allowed Donath to get alongside at the line.  Wight quickly slammed the door going into turn one.

“I saw Donath show me a nose there and I had a chop him a little bit going into to one to make sure I got that bottom,” mentioned Wight.  “After that I picked it up a little bit.”

A lap later Donath was still searching for an advantage on Wight.  As he moved off the preferred lane in turns three and four Tanner pounced to move on by for the second position.  Now his full attention was placed on Wight at the front of the field.

The longer the race went non-stop, the more traffic that began appearing in front of Wight.  His patience in traffic continued even with Tanner knocking on the rear bumper.  Wight never wavered from the inside groove with Tanner trying everything to get by.

“The track started laying a little bit of rubber so I knew all I had to do was make sure to stay on the bottom so no one could get underneath me,” stated Wight.  “When we got to lapped cars I waited for them to slip up so I could go underneath them.  I knew if tried going around the outside of them I was going to slip up and slide by to fifth real quick.”

Wight went on to win by just over a half-second with Tanner ending up in second.  The Stephentown, N.Y., driver gave it all he had, but Wight never made a mistake forcing Tanner to be happy with second.

“In lapped traffic I thought we had a shot at him,” said Tanner.  “He was sliding off the bottom a little bit.  We were rolling pretty good.  At the end it was rubber racing so you had to take what you could get.  We went from eighth to second on this kind of track so that’s pretty good.”

Paul Kinney made a late charge to get up into the third spot.  Like Tanner, he was hoping for some mistakes by the drivers in front of him to advance even further in the field.

“Guys were over driving the corner a tiny bit,” cited Kinney.  “If you just missed that a rubber a hair someone was ready to jump on you.  I was hoping Matt (Tanner) would try to go around Larry (Wight) on the top so I could go by him on the bottom there.  I think he knew it was safer to stay on the bottom.”

Donath ended up coming home in the fourth spot at the checkered with hometown favorite Jeff Cook ending up in fifth.