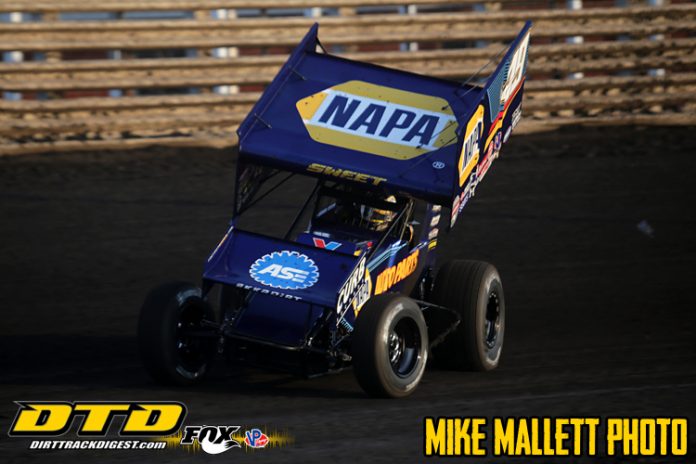 PLACERVILLE, CA – Brad Sweet passed Rico Abreu on Lap 8, was masterful through heavy lapped traffic, and held off Sheldon Haudenschild in a Green-White-Checkered finish to win the 49er Gold Rush Classic Presented by Riebes NAPA Auto Parts at Placerville Speedway. The win was Sweet’s 7th of the season and worth $20,000. Haudenschild kept the fans on the edge of their seat and came home second with local Andy Forsberg, who scored $2000 for setting Quick Time earlier in the evening, completing the podium.

Rico Abreu, fresh off his Gold Cup Race of Champions victory Saturday at Chico, won the Sears Craftsman Dash to earn the pole for the 49-Lap Feature alongside Sweet. Abreu got a good initial start and led the opening circuit and paced the field before Jason Sides brought out the first caution of the event with three laps complete.

Abreu powered away on the restart and reached lapped traffic quickly around the quarter-mile, high-banked oval. Sweet hawked Abreu as the latter entered traffic and made the move to take command of the field off of turn four to lead Lap 8.

A Red Flag for Brent Marks on Lap 14 halted action and took the leaders out of heavy traffic. Marks, who had come forward seven positions to 11th, was uninjured, but done for the evening.

The next 34 laps went non-stop allowing the leaders to endure as heavy of lapped traffic as they will see all season.

Abreu bobbled in turn four on the cushion on Lap 28, allowing Haudenschild to move into second. But Haudenschild made the same mistake the following lap as Abreu slid back in front of the young Wooster, OH native to reclaim second at the line.

By Lap 35, there were lapped cars scattered all over the racing surface in front of Sweet, forcing him to slow his pace and allowing the pack to close in. Abreu took a couple of looks underneath Sweet, but the latter remained in the gas and never gave Abreu a chance to slide him.

Lap 45 saw Sweet trying his best to navigate traffic on the cushion with Abreu looking desperately for a way by him and Haudenschild looming as the leaders were nose to tail down the backstretch.

Sweet had a strong three laps, putting two lapped cars in between himself and Abreu and Haudenschild coming to the White Flag. Haudenschild grabbed second at the White Flag and then slid to the top of turn one to maintain momentum. Stuck with nowhere to go, lapped car Jacob Allen flipped off of the top of turn one. Allen was uninjured with the Red Flag setting up a Green-White-Checkered finish.

As the cars came to a stop for the Red Flag, Abreu uncharacteristically rolled into Haudenschild. Abreu got out of his car and informed World of Outlaws officials that the steering broke on his family-owned No.24 and his night was over.

Sweet got an excellent restart, thwarting any chance of Haudenschild’s late race heroics as Sweet went to win, the, now, 50-Lap Feature, by 0.611 seconds.

Sweet, who was a co-promoter of the event, was visibly excited to get the big win in his hometown. “I don’t know if that’s cool or not [that I won my own race], but $20,000 was on the line. It’s great to get the NAPA car in Victory Lane in the Riebes NAPA Auto Parts Race,” Sweet said next to his Kasey Kahne, who was in attendance, owned No.49.

“It’s awesome to come back here in my hometown in front of all my friends and family and get the win. Lapped traffic was really tough, I hope you guys enjoyed the show. We’ll be back next year,” Sweet added.

When asked about the hectic lapped traffic, Sweet said, “I thought I covered most of my lines, but I knew someone was close. You just try to keep your composure and pick off the lapped cars the best you can. The cushion was tricky, kudos to the Russell family, they do a great job here every week and we get to play in their playground once a year.”

Sweet ended with a heartfelt statement, “I have so many people to thank for helping put on this show and I’m very appreciative.”

Sheldon Haudenschild finished second and was equally as appreciative. “Brad did a great job and a huge thanks to him for putting this race on. Thanks to the fans for coming out on a weekday, I know it’s difficult and we appreciate it. Hopefully you all enjoyed the show, I had a blast. This is a beautiful track. I’m definitely grateful to be in this position and to be able to race Sprint Cars for a living,” Haudenschild said next to his NOS Energy Sponsored, Stenhouse Jr.-Marshall No.17.

Andy Forsberg, the current Placerville Speedway 360 Sprint Car points leader, led the local charge finishing third, his third top-ten against the Outlaws in as many starts this season. “This is a 2009 chassis and the youngest guy on my crew is 54 years old and they work their tails off,” Forsberg, who will wrap his 20th points title as a driver this Saturday at Placerville, said with a big smile. “Every once in a while, you can sneak a good run against the Outlaws,” Forsberg added before stating how proud he was of his team for their runs against The Greatest Show on Dirt this week.

Tim Kaeding continued his outstanding success in a second Sides Motorsports entry coming from 10th to fourth with Eliason settling for fifth. David Gravel crashed in the Heat Race was forced to take a Provisional and earned KSE Hard Charger honors coming forward to 13th.

Shane Stewart and Justin Sanders flipped in the Sears Craftsman Dash, forcing Stewart to a backup car and to start at the rear while Sanders start and parked because of the damage. High Sierra Industries put up $1000 cash if a World of Outlaws driver set Quick Time and doubled that if a non-Outlaw set Quick Time, which sent Forsberg home with $2000 extra in his pocket for his 10.282 lap around the bullring.

The World of Outlaws Craftsman Sprint Car Series concludes its California swing this weekend September 14 and 15 at the beautiful historic Calistoga Speedway. Tickets for the Wine Country Classic are still available. If you can’t make it to the track, watch every lap LIVE on DIRTVision.com!