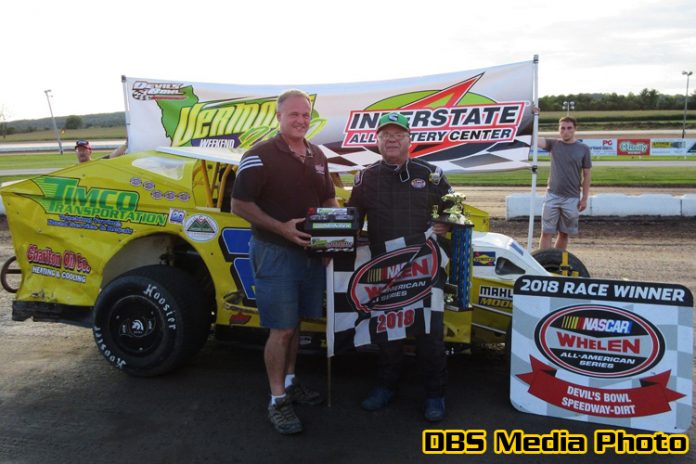 WEST HAVEN, VT – The Interstate All Battery Center Vermont 200 Weekend kicked off with a big day of racing at Devil’s Bowl Speedway on Saturday, September 15. Ron Proctor, Jim McKiernan, and Austin Chaves opened the biggest event in the track’s history by visiting victory lane, setting up a huge Sunday program.

Proctor sailed to the win in the second annual 20-lap “Ron Casey Memorial” Non-Winners Shootout for the Central Vermont Motorcycles Sportsman Modified division. The Charlton, N.Y., driver and two-time Devil’s Bowl track champion had a nearly perfect day, winning his qualifying heat and leading every lap of the feature race.

The race started with a few hiccups as it took the 23 starting drivers to get into a rhythm, but by the fourth lap the racing was top-notch. Vince Quenneville Jr. made a run at Proctor during the second half and even nosed ahead for the lead on the outside lane with six laps left, but a caution period for a spin negated the pass and gave Proctor the lead for the restart.

Proctor pulled away at the final green flag for his first win on a dirt surface at Devil’s Bowl since September 5, 1999; he won in a 10 year-old Teo chassis on coilover shocks – a setup leftover from his dominant years on the former asphalt surface at Devil’s Bowl. Proctor was presented his trophy by the family of Ron Casey in victory lane.


Jim McKiernan posted the biggest victory of his career in the Super Stock division, taking a 50-lap race that paid $1,000 to win. The Moriah Center, N.Y., veteran first rebounded from a wild crash to win his qualifying heat, and then survived the repeated challenges of longtime rival Scott FitzGerald throughout the main event for the win. FitzGerald finished a distant second as McKiernan pulled away.

Austin Chaves of Chester, Vt., won for the fourth time in the Friend Construction 500cc Mini Sprints, but had to hold off rookie Dakota Green in a tight battle in the second half of the 20-lap race. Green made a last-turn effort on the outside lane to get the win, but slipped out of the groove and allowed Chaves to cruise to the checkered flag. Shawn McPhee finished third ahead of Evan Roberts and Samantha Mulready.

The Interstate All Battery Center Vermont 200 Weekend continues on Sunday, Sept. 16 at 2:00 p.m., with three rounds of qualifying for Sportsman Modifieds, two B-Mains for non-qualifiers, and a 200-lap, $10,000-to-win main event. More than 40 drivers have filed official entries as of Saturday, with nearly double that number expected to attempt qualifying on Sunday including star drivers Brett Hearn, Kenny Tremont Jr., Jessey Mueller, and many more. Also on the card are the championship finale for the visiting King of Dirt Racing Pro Stock Series and the $1,000-to-win Portland Glass 50 for the Mini Stock division.

General admission is $25 on Sunday with kids 12 and under admitted free; pit passes are $40. Grandstands open at 12:00 noon with racing at 2:00 p.m. The Vermont 200 Weekend is presented by Interstate All Battery Center of Rutland, Fabian Earth Moving, Portland Glass, Kubricky Construction, and Central Vermont Motorcycles.