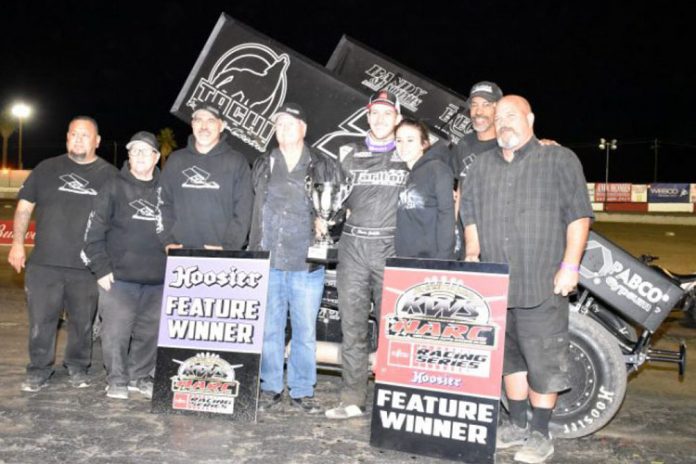 In fact, it was a season sweep of the two races at Kern County for Golobic and the Tarlton Motorsports Tachi-Palace & Casino-backed, Paul Baines-wrenched KPC team. This combination also claimed the KWS-NARC season opener on April 7th.

The victory allowed Golobic to dramatically tighten up the championship point standings after series leader Kyle Hirst took a nasty tumble on the original start. Luckily, Hirst walked away from his destroyed race car unhurt, but his huge lead in the standings didn’t fare so well. With only two-races remaining, Hirst now leads Golobic by a very slim 1270-1257 margin (unofficial.)

Polesitter Croft, who also set quick time and won the Sunnyvalley Bacon dash, was the class of the field on the initial green until Golobic closed in when the leader got slowed in traffic on lap five. Golobic catapulted past Croft as they split a lapped car motoring down the back straightaway on lap seven. Bud Kaeding followed suit a lap later.

Kaeding started to pressure Golobic at the midway point and actually passed the leader, only to lose the advantage two turns later. Dominic Scelzi moved into contention and the top three raced only a few feet apart. However, Golobic made a couple of stellar moves while negotiating lap cars and moved out to a 10-car length advantage.

Scelzi and Kaeding put on a war for the runner-up spot that was worth the price of admission, swapping the position on a corner by corner basis. Unfortunately that would also be their undoing as the duo got together with only four laps remaining. Scelzi end up spinning out exiting the second turn and Kaeding sported a shredded a left rear tire shortly thereafter.

On the ensuing restart, Croft made a couple of runs at the leader but was unable to make it stick, having to settle for second in his Holey Smokes BBQ/Amerikote EMI.

“I made some pretty good moves that got me through lapped traffic tonight,” said Golobic. “I can’t say enough about this entire Tarlton Motorsports team who gave me a fantastic race car to get the job done.”