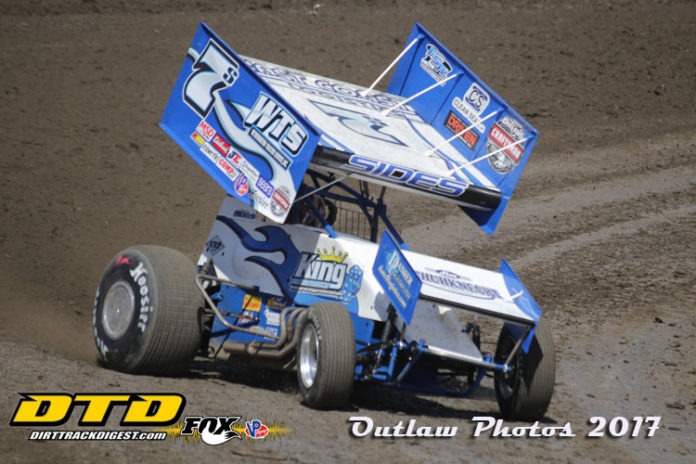 CONCORD, NC – After a three-year hiatus, the World of Outlaws Craftsman Sprint Car Series will make its awaited return to Dodge City Raceway Park in Kansas on Saturday, October 20. Last year’s Boot Hill Showdown was lost to Mother Nature, but The Greatest Show on Dirt will return to the semi-banked 3/8 mile in 2018.

Perhaps no one is more excited for the World of Outlaws’ return to Dodge City than veteran Jason Sides. Sides has two career victories at Dodge City, including one during the last time the Outlaws visited the facility in 2015. Sides won the opening night of the Boot Hill Showdown that year and finished fourth on Night Two.

“It’s a beautiful place,” Sides said of Dodge City. “We love going to race there, and it’s a place we’ve had some success at. Hopefully, we can put together a good run,” the Bartlett, TN native, who also has a 2011 Dodge City win, added.

Dodge City Raceway Park has been a staple on the Outlaw schedule since 2004, when Steve Kinser won the inaugural event.

In addition to Sides, Daryn Pittman has had a lot of success at the Kansas facility, scoring four wins, including three of the last six Outlaw events, at Dodge City. Donny Schatz, who is the most recent Outlaw winner at Dodge City, and Kraig Kinser (2012) are other active full-time Outlaws with wins at the facility.

In addition to the Outlaw regulars, Joey Saldana – a five-time Outlaw winner at Dodge City – will pilot the Jason Johnson Racing No.41 as a part of his five-race schedule with the team. Pennsylvania’s Brock Zearfoss is slated to be in attendance for his Dodge City debut as well.

Tickets for The Greatest Show on Dirt’s return to Dodge City Raceway Park are still available and can be found here. If you can’t make it to the track, watch all the action LIVE on DIRTVision.com!