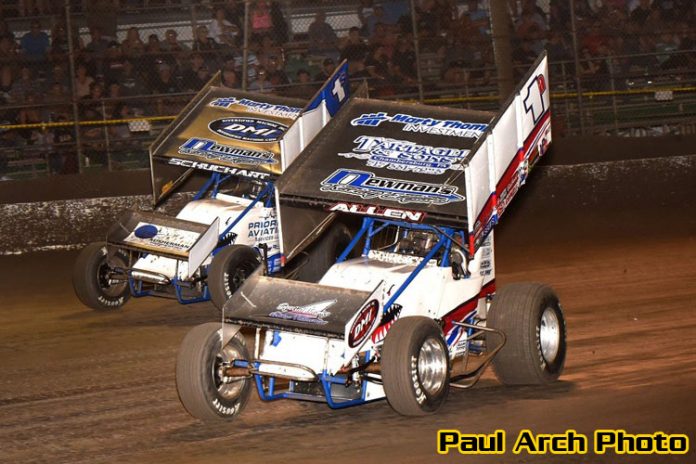 The track
Lakeside Speedway is a semi-banked four-tenths-mile. The track record of 13.304-seconds was established by Paul McMahan on June 7, 2014.

Past winners
Brian Brown was victorious over Sheldon Haudenschild and Donny Schatz last year at Lakeside Speedway. Brown led the opening seven laps from the pole. Kerry Madsen got by him on the eighth circuit and opened a commanding lead of nearly nine-seconds, only to have a flat tire with less than 10 laps to go. Brown inherited the lead at this point and would pace the final 10 laps to score the win.

Brad Sweet won for the first time at Lakeside Speedway in 2016, with his Kasey Kahne Racing teammate Daryn Pittman finishing second in that event.

Schatz, the nine-time and defending series champion, won for the first time at Lakeside Speedway in 2015. Pittman is the only other active full-time series driver who has won at the track, taking the checkered flag in 2003.

Near the front
Donny Schatz has been one of the most consistent drivers at Lakeside Speedway over the years. The North Dakota native has nine top-10 finishes in 11 starts at the track. Schatz won for the first time at Lakeside in 2015, which at the time was one of the few tracks on the circuit where he had not previously won. He finished third in the FVP Outlaw Shootout last year.

Always in the top-10
Daryn Pittman, Brad Sweet and Shane Stewart have all finished among the top-10 in each and every one of their starts with the World of Outlaws Craftsman Sprint Car Series at Lakeside Speedway. Pittman is seven for seven, including a win in 2003. Sweet is five for five, with a win in 2016. Stewart is four for four, with a best finish of fifth in 2016.

A handful of starts
David Gravel, Logan Schuchart, Ian Madsen, Jacob Allen and Greg Wilson have each made five starts or less with the World of Outlaws Craftsman Sprint Car Series at Lakeside Speedway. Gravel and Schuchart each have three top-10 finishes at the track. Madsen crossed the line fourth last year, which marked a new career-high for him at the historic track. Wilson earned a top-10 finish in his debut at Lakeside during the 2016 season, which was his first year on the road with the Outlaws.

Eighth wonder
Kraig Kinser and Jason Sides have each made eight starts with the World of Outlaws Craftsman Sprint Car Series at Lakeside Speedway in their respective careers. Kinser has three top-10 finishes, including a runner-up performance in 2012 at the track. Sides also has a runner-up finish to his credit, with that coming in 2013.

Return visit
Sheldon Haudenschild and Brent Marks made their debuts at Lakeside Speedway last year. Haudenschild, who had a thrilling battle with his father Jac while among the top-three, ended up finishing second, while Marks ran 12th. Each of the sophomore drivers earned their first-career Outlaws win earlier this season and have added several victories since. Haudenschild has five wins, with Marks having taken the checkered flag three times.

Close to home
The Jason Johnson Racing No. 41, based out of Rocky Mount, Mo., will be in action at Lakeside Speedway, with Joey Saldana behind the wheel. Saldana will compete in both races this weekend in the state of Kansas as well as during the World Finals in Charlotte to close out the year. Last year the team finished fourth with the late Jason Johnson behind the wheel.

Invaders
Leading the list of “invaders” is Brian Brown, who will be defending his win from last year. Brown won seven times in weekly competition at the famed Knoxville Raceway in Iowa this year. Also in action will be Kerry Madsen, who is a past winner at Lakeside. Brock Zearfoss from Pennsylvania will be in action, as well will teenager Mason Daniel from California, who is being mentored by 2001 World of Outlaws Craftsman Sprint Car Series champion, Danny Lasoski.

Tickets for the FVP Platinum Battery Shootout, featuring the World of Outlaws Craftsman Sprint Car Series at Lakeside Speedway in Kansas City, Kansas on Friday, October 19 can be purchased online at slspromotions.ticketforce.com or by calling SLS Promotions at 815-344-2023 and at the track on race day.