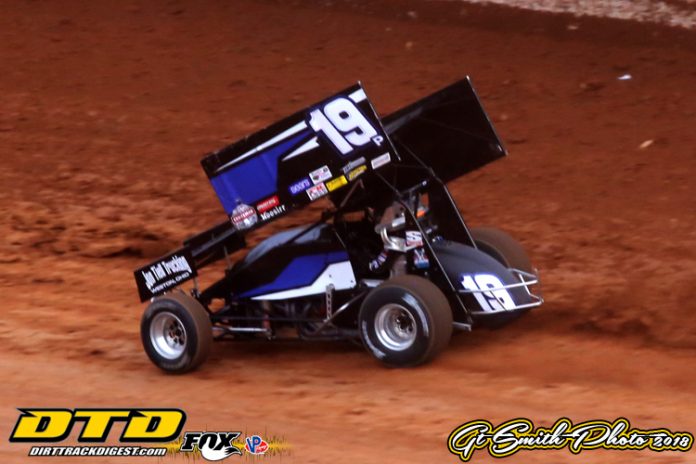 It is a veritable who’s who in Sprint car racing in the pits at the World Finals presented by Can Am pits, but the 52 car field was divided into two flights which resulted in some surprises.

Polyak clocked the four-tenth’s of a mile surface in 12.724 to lead Qualifying A and Price-Miller, coming out very late, passed Spencer Bayston, came home with a 12.607.

PPM said, “It is a good start for us. I knew we were going out late and watched the other cars. To qualify and start up front here is special. This is such a big race and I’d put it up there with the Kings Royal and Knoxville, but not moneywise.”

Parker was coming off a physical jarring accident in California and said, “I came down hard on the rails. It was the hardest hit my back has ever taken. In fact I have a cracked T4 and three bulging disks.”

His luck at the track hasn’t been great as he explained, “I haven’t done very well here.Two years ago I was in the C and last year in the B. I had a provisional, but overall we haven’t done well.”

However, things change as he said, “Well we qualified up front and hopefully that’s where we will be starting.”

The Tiffin, Ohio native Polyak said, “This is pretty cool. It is the first time we been a fast qualifier with the World of Outlaws. Mike Woodring had the car set up well and we had a good motor. Last year we made it one night so this is just so cool.”

Polyak was thrilled to be in the position as she said,”We are one of those low funded teams and don’t have a lot. What you see here and in the trailer is everything we’ve got. I really feel we’ve just gotten better and better.”