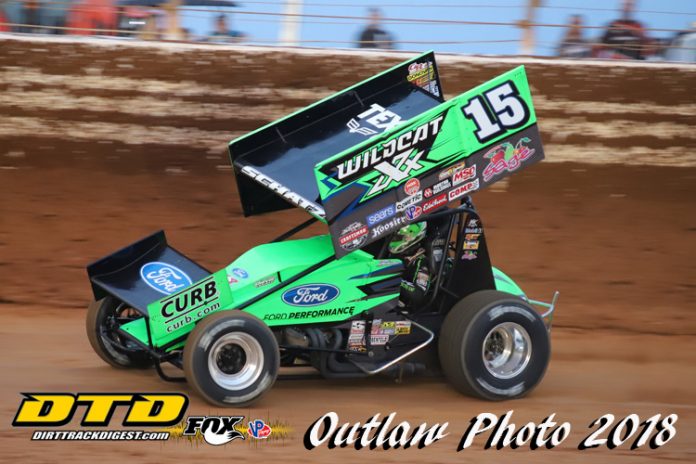 CONCORD, NC – Parker Price-Miller and David Gravel set fast time for Friday and Saturday night, respectively, but it was Donny Schatz stealing the show during Thursday’s World Finals presented by Can-Am at The Dirt Track at Charlotte Motor Speedway. By taking the track Thursday, Schatz clinched his 10th World of Outlaws Craftsman Sprint Car Series Championship, and fifth straight, aboard the Tony Stewart/Curb-Agajanian Racing No.15.

Schatz will look to add to his 21 wins in 2018 this weekend after going eighth and fourth quick during Qualifying Thursday evening.

Soon to be named the 2018 Kevin Gobrecht Rookie of the Year, Ian Madsen positioned himself nicely for the weekend going third and fourth quick.

Last year’s Rookie of the Year, Sheldon Haudenschild also had a strong evening, as he will start from the front row of his Heat Race both nights.

In his first night aboard a Kyle Larson Racing entry, Carson Macedo went fifth and third quick, respectively, to earn a front row starting spot in both of his Heats as well.

Tennessee’s Paul McMahan, Pennsylvania’s Tim Shaffer and Australia’s Kerry Madsen will also be on the front row of their Heats both nights. Madsen is aboard a second CJB Motorsports entry for the weekend.

The evening went relatively smoothly for the World of Outlaws Craftsman Sprint Car Series, as the only caution during Green Flag action came when Kasey Kahne lost a wheel and spun on his second Qualifying lap. Kahne was still able to go 10th and ninth quick during his sessions and will be ready to go when racing action gets underway. Ohio’s Shawn Dancer had mechanical issues and did not record a lap for either Friday or Saturday.

Friday’s World Finals presented by Can-Am is still on as scheduled, stay tuned to World of Outlaws and The Dirt Track at Charlotte Motor Speedway’s social media channels for the most up-to-date news regarding schedule changes.

As always, if you can’t make it to the track, watch every lap LIVE on DIRTVision.com!