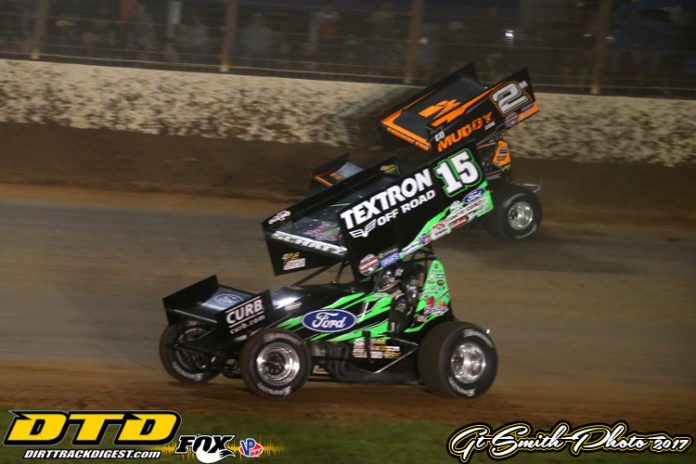 “We are looking forward to another great season of World of Outlaws racing in 2019,” longtime Series Director Carlton Reimers said. “On the strength of our excellent relationships with tracks and promoters, we are eager to get the season started with our determined teams for our dedicated fans.”

With driver and team changes taking the majority of the early off-season spotlight, the official announcement of the full schedule heightens the excitement for the 2019 season as the days wind down until the 48th Annual DIRTcar Nationals at Volusia Speedway Park on February 5th-16th in Barberville, FL.

Following Florida, the World of Outlaws will head west with stops in Texas and Las Vegas before spending the entire month of March in California, where the Series will stop at eight different facilities, including the return to Keller Auto Speedway in Hanford on Friday, March 29.

An additional date in Arizona at USA Raceway in Tucson will open April before the Series heads east for the $20,000-to-win Texas Outlaw Nationals at Devil’s Bowl Speedway in Mesquite, TX on April 12-13.


May remains consistent, with the Series’ first visit of the season to the East Coast with stops in Pennsylvania, New Jersey, New York and North Carolina.

May crosses into June with the much-anticipated inaugural $25,000-to-win Music City Outlaw Nationals at Nashville Fairgrounds Speedway that will take place Friday, May 31 and Saturday, June 1 in the heart of Music City, TN.

With the premier drivers comes premier events and as the summer begins to heat up, the World of Outlaws will take center stage at every marquee event, starting at the three-day, $41,000-to-win Jackson Nationals in Jackson, MN.

Kings Royal weekend at the famous Eldora Speedway promises to be one to remember as a significant purse increase has been confirmed.

Following Kings Royal, the Outlaws will take place in four straight events that pay at least $20,000-to-win at Lernerville Speedway (Don Martin Memorial Silver Cup), Williams Grove Speedway (Champion Racing Oil Summer Nationals) and Federated Auto Parts Raceway at I-55 (Ironman 55) before ending the lucrative stretch at “The Granddaddy of Them All” the Knoxville Nationals.

Following the Nationals, the Outlaws will head west once again with stops in the Dakotas and Montana before their annual stop in Washington and Oregon and fall swing through California. Added to the fall West Coast swing is the Series inaugural visit to Fernley 95A Speedway in Nevada on Sunday, September 15.

A return of the two-day Boot Hill Showdown at Dodge City Raceway Park and the final stops of the year at the popular Eldora and Lernerville Speedway’s lead the Outlaws to the Champion Racing Oil National Open at Williams Grove Speedway, which will pay $56,000-to-win.

After a final cycle through the Midwest, the World of Outlaws will finish up on the East Coast at Port Royal Speedway before concluding the season alongside the World of Outlaws Craftsman Late Model Series and Super DIRTcar Series Big-Block Modifieds at the World Finals at The Dirt Track at Charlotte Motor Speedway on November 7-9.

With new faces, new partners and the same heart-pounding excitement of 800-plus horsepower Sprint Cars, the 2019 World of Outlaws season promises to be nothing short of spectacular.

All 92 nights of Outlaw racing, including the Knoxville Nationals, will be available LIVE on DIRTVision.com!