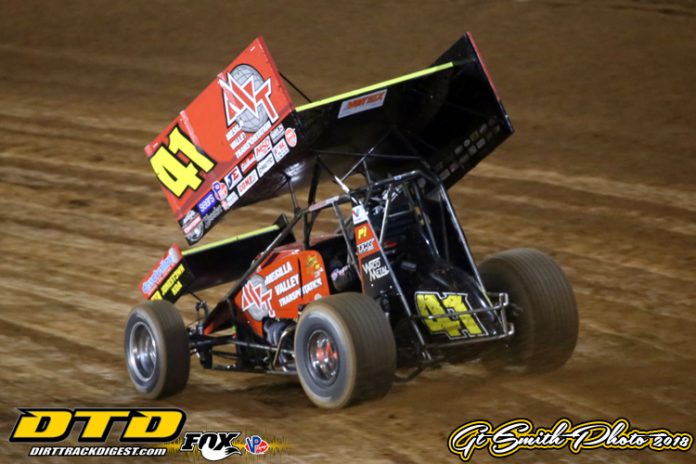 CONCORD, NC – The World of Outlaws NOS Energy Drink Sprint Car Series will return to Texas for a pair of crucial early season races at Cotton Bowl Speedway Friday, February 22nd and LoneStar Speedway on Saturday, February 23rd. With the addition of a new title sponsor and new driver and team combinations, The Greatest Show on Dirt will have a new look in 2019, both on and off track, making the February races that much more important as teams attempt to establish momentum for the 2019 season.

The World of Outlaws NOS Energy Drink Sprint Car Series will make its third visit in its 41-year history to Cotton Bowl Speedway in Paige, TX with Brad Sweet scoring the inaugural win at the semi-banked 3/8th oval in 2016 and David Gravel sweeping the program, including setting a new track record, a year ago. While Sweet will return in 2019 to his Kasey Kahne Racing No.49, Gravel begins a new adventure this season taking over the reins of the Jason Johnson Racing No.41.

“We were really good at Cotton Bowl last year and hopefully that translates this time around. Everyone wants to get a good start to the season, especially this year. These early season races are where we establish momentum and I’m looking forward to what the JJR team can do right out of the gate,” Gravel said in anticipation of returning to Cotton Bowl.

The following night the Series will trek to Kilgore, TX for its 13th appearance at LoneStar Speedway, dating back to 1984. 10-time Series Champion Donny Schatz is the most recent winner after last year’s event at the 1/3rd-mile high-banked oval was rained out.

A strong car count is expected for both Texas races. In addition to the 13 full-time World of Outlaws NOS Energy Drink Sprint Car Series regulars, Kasey Kahne, Terry McCarl, Mason Daniel and a cast of others have both Cotton Bowl and LoneStar Speedway on their schedules. It certainly wouldn’t be a surprise to see Texas natives 2018 All-Star Champion Aaron Reutzel and 2018 ASCS Gulf South Champion Channin Tankersley make an appearance as well.


The Greatest Show on Dirt will return to Texas for the final time in 2019 at Devil’s Bowl Speedway in Mesquite, TX. Tickets for both Cotton Bowl Speedway and LoneStar Speedway are on sale now. If you can’t make it to the track, watch all the action LIVE on DIRTVision.com.