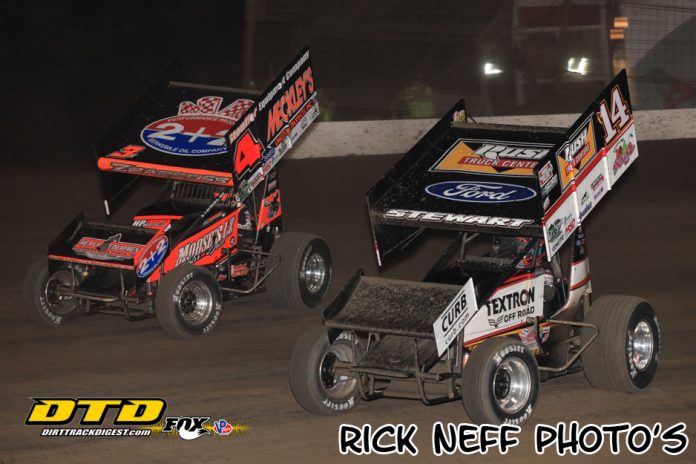 BROWNSBURG, IN – Continuing a longstanding tradition, the Ollie’s Bargain Outlet All Star Circuit of Champions presented by Mobil 1 will kickstart the 2019 season in the Sunshine State, ready to invade a pair of Florida ovals for a combined five events between January 31 and February 7. Celebrating its fifth season under the ownership of three-time NASCAR Cup Series champion, Tony Stewart, the All Stars will visit Bubba Raceway Park in Ocala and Volusia Speedway Park in Barberville during their early season travels, competing for five consecutive $5,000 top prizes.

Although the five Florida starts officially kick off the near year, action will not accumulate points toward the overall All Star Circuit of Champions title.

“We are excited to be venturing back to Florida. It’s tough to imagine a new year without a trip to Bubba Raceway Park and Volusia Speedway Park,” Tony Stewart said. “We’ve gone through some big changes over the last few months including the addition of a new title sponsor. We are thrilled to have Ollie’s Bargain Outlet join the All Star family. I’m confident this is going to be a year for the record books.”

Although a full-time All Star Circuit of Champions roster has yet to be finalized, many former full-timers will rejoin the Series in 2019 and kick off the year with the Florida road trip; defending Series champion and win leader, Aaron Reutzel, included. The Texas native earned nine victories on the road last year for Baughman-Reutzel Motorsports, also accumulating 30 top-ten finishes in 41 feature starts.


Other returning All Stars making the trip to northern Florida include West Virginia’s Cale Conley, the familiar Tom Buch entry driven by Nashville’s Paul McMahan, and former All Star champion and Ohio Sprint Speedweek champion, Chad Kemenah, who will drive a team car to former All Star full-timer, John Garvin.

A stout contingent of potentially new All Star faces will hit the highway and venture south for the early parts of February including a pair of Premier Motorsports entries driven by Brock Zearfoss and Spencer Bayston, as well as Rudeen Racing’s newest hired ace; Kingsburg, California’s Cory Eliason.

Western Pennsylvania’s George Hobaugh, one of the most recent drivers to verbally commit to the Series, will also join in on the action at Bubba Raceway Park and Volusia Speedway Park, as well as the Central Pennsylvania father/son duo of Jim and Mallie Schuster.

Although Donny Schatz, the eventual World of Outlaws champion in 2018, displayed absolute superiority during the 2018 DIRTcar Nationals by sweeping the All Star Circuit of Champions segment, the 2018 visit to Bubba Raceway Park resulted in three different winners, Alvada, Ohio’s Chad Kemenah being the first. Kemenah’s triumph, his first of two on the year with America’s Series, commenced from the inside of row nine.

Drivers and teams should note that Bubba Raceway Park will open pit gates at 9 a.m. during the entire weekend program. A mandatory All Star Circuit of Champions drivers meeting will be conducted at 5:30 p.m. on Thursday and Friday, but pushed ahead to 4:30 p.m. on Saturday. Hot laps are slated to begin at 6:45 p.m. each night. For those seeking more information, please visit Bubba Raceway Park live on the Web at www.bubbaracewaypark.com.

Volusia Speedway Park will open pit gates at 10 a.m. for the All Star Circuit of Champions segment of the DIRTcar Nationals. The mandatory All Star drivers meeting is scheduled to begin at 5 p.m. each night, followed by hot laps promptly at 6 p.m. Those seeking more information should visit the DIRTcar Nationals online at www.dirtcarnationals.com.