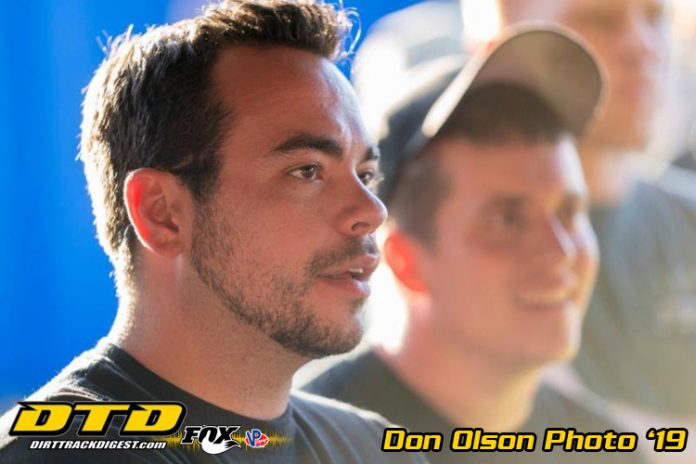 SPEEDWAY, IN – In the long, storied history of the United States Auto Club, only six drivers have been able to claim the title of USAC Triple Crown champion by winning the USAC Silver Crown, AMSOIL National Sprint Car and NOS Energy Drink National Midget championships during their career.

In 2019, Chris Windom aims to become the next in line to take his shot at becoming the seventh as he climbs into the seat of the Clauson Marshall Racing No. 17BC for a full-season run with the USAC NOS Energy Drink Midget National Championship tour.

Windom, of Canton, Ill., captured the Silver Crown title in 2016 followed a year later by the Sprint Car title in 2017. That put him two-thirds of the way toward the Triple Crown – the most coveted reward in terms of versatility between the varying open wheel cars of USAC’s three national divisions.

In the early years of USAC, several races in each division overlapped each other, preventing drivers from being able to chase multiple titles within a single season. Pancho Carter was the first to reach the milestone, doing so all in different years. Following a midget title in 1972, he collected Sprint championships in 1974 and 1976 before his Silver Crown championship in 1978.

It was another 17 years before the accomplishment would be replicated by Tony Stewart in 1995, who achieved the unthinkable by snaring all three titles in the same season, capitalizing on a 1994 season in which he was the USAC National Midget king. Dave Darland picked up titles in the reverse order of the size of the car, winning the Silver Crown championship in 1997, Sprint in 1999 and Midget in 2001-02.

In 2003, J.J. Yeley signed on to drive for Tony Stewart’s sprint team following a Silver Crown title aboard the Stewart and Bob East-owned Silver Crown ride the year before in 2002. Yeley repeated Stewart’s feat in ’03 in record fashion, with 24 total victories between the three National divisions, a USAC single-season record, on his way to tiles in Stewart-owned Sprint and Silver Crown cars and the same Steve Lewis midget team that Stewart competed for in 1995.

Jerry Coons, Jr. was able to record his four championships in three different USAC series in quick succession during the mid to late-2000s, winning back-to-back midget titles in 2006-07. He then reeled off both the Sprint and Silver Crown championships in 2008, the first to get both in the same season since Yeley in 2003.

Tracy Hines entered the ring of champions with the Silver Crown series in 2000, then snagged a Sprint title in 2002 and it seemed as if the National Midget title was a foregone conclusion to belong to him at some point in his career. However, after 14 top-five finishes in the USAC National Midget final standings, his long-awaited crown finally arrived in 2015.

Though primarily known for his prowess in sprint cars and Silver Crown cars, Windom does possess 92 career USAC National Midget feature starts since 2007, the bulk of which came toward the beginning of his career. He finished runner-up at Bloomington (Ind.) Speedway as Kyle Larson won his first career series race. In 2012, he finished second behind Wilke-Pak teammate Brady Bacon in the “Hut Hundred” at Tri-State Speedway in Haubstadt, Ind. and was fast qualifier at Bloomington.

Last year, Windom made two Midget starts and takes over the ride formerly driven by Justin Grant and Cole Bodine in 2018. Grant won in the car last summer during the “Midwest Midget Championship” at Jefferson County Speedway in Fairbury, Neb.

At press time, Windom and Kevin Thomas, Jr. are the only drivers to have secured full-time rides for all three USAC National divisions in 2019.