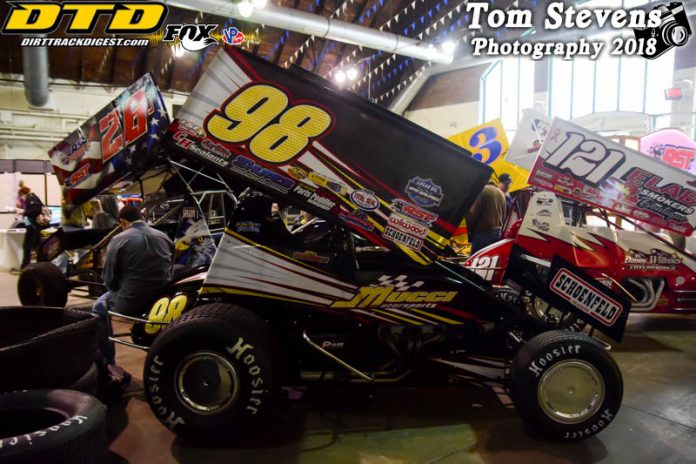 SODUS, NY – As we inch closer to the 2019 season, the A-Verdi Storage Containers Patriot Sprint Tour will kick off their 17th season of operation by being apart of two pre-season car shows in central New York.

The PST display booth will be a part of Finger Lakes Speed-world this coming weekend March 2 and 3, at the Finger Lakes Mall in Auburn, NY. Fans will get an opportunity to pick up a 2019 schedule card as well as getting an up close look at the rides of Darryl Ruggles, Alysha Bay, Brandon Griffin and Erik Karlsen.

The following weekend, the Patriots will have a large presence at the 33rd annual Motorsports Exposition Show at the New York State Fairgrounds in Syracuse, NY. Having his car on display is three-time and defending series champion, Chuck Hebing. He will be joined by tour regulars such as Joe Trenca, Pete Richardson, Paulie Colagiovanni and Steven Glover.

Mike Emhof Motorsports Inc. will have a booth adjacent to the PST display. Sophomore 305 pilot, Johnny Kolosek will be the lone representative.

The first official race will be on Friday, April 19 at Outlaw Speedway for the 4th annual Outlaw Spring Nationals. It is a challenge event with the Empire Super Sprints and it pays $3,000 to win.

Please be sure to monitor PST Social Media on facebook, twitter, and Instagram as well as logging on to patriotsprinttour.com for more information prior to the start of the 2019 season.