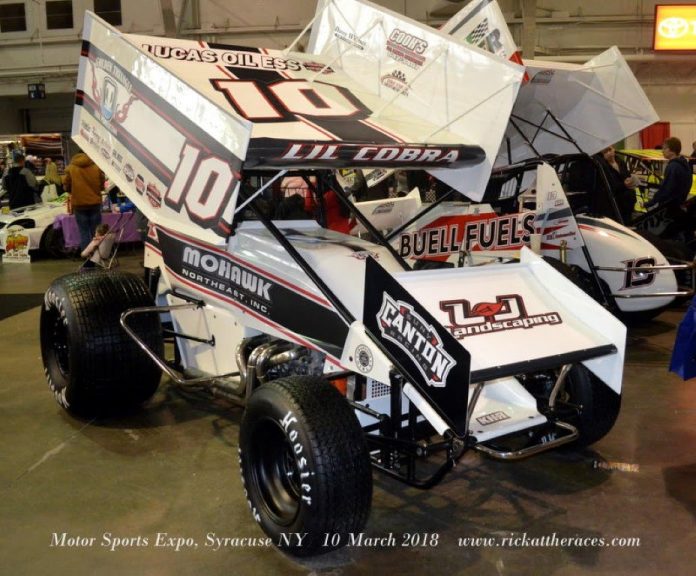 SYRACUSE, NY – The Lucas Oil Empire Super Sprints (ESS) are ready to meet and greet all this weekend at the 33rd Syracuse Motorsports Expo in the Center of Progress Building located at the New York State Fairgrounds. The event annually kicks off the racing season in upstate NY and ESS is proud to be a part of all 33 years that the Expo has been held!

Fans that stop by will see a block of six winged sprint machines, can purchase the new 2019 line of merchandise, pick up a 2019 schedule card to just to stop by and say hi!

Heading the list of cars will be a sharp, new look for 2018 Lucas Oil ESS champion Steve Poirier. It’s the first time that the record tying, eight-time champ will have his car at the Expo. Also making up the car log will be the sprints of top runner Paul Kinney, last years Most Improved driver Kelly Hebing, 2017 Rookie of the Year Brett Wright, 2018 Rookie of the Year Josh Flint and rookie for 2019 in Tyler Cartier.

Many of the ESS drivers will also be at the booth and roaming the halls all weekend. Show hours will be Saturday from 10AM – 8PM and Sunday 11AM – 4PM.

The 36th Anniversary Tour for the very best of “America’s Race Cars” will take to the dirt for the first time on Friday, April 19th at the Outlaw Speedway for a $3,000 to win, $300 to start event that starts the run for the 2019 Lucas Oil Championship. One week later the ESS traveling road show will tackle the Fulton Speedway to kick off the annual High Bank Holdup Weekend.


Syracuse Motorsports Expo, Lucas Oil Empire Super Sprints, a combination that has a tradition of 33 consecutive years. Stop by the ESS booth this weekend!