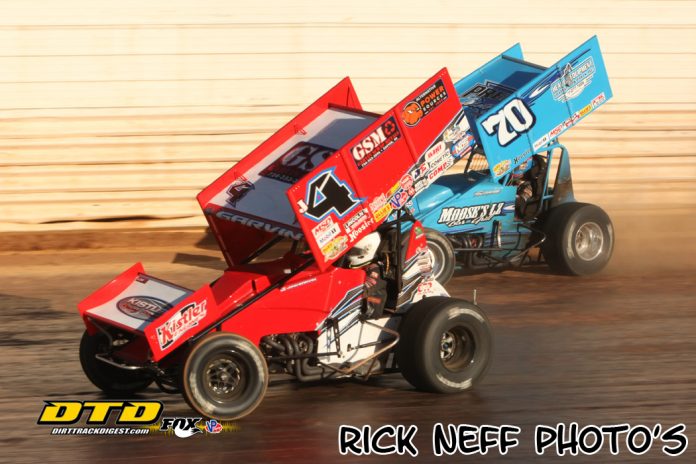 BROWNSBURG, IN – Although the 2019 Ollie’s Bargain Outlet All Star Circuit of Champions presented by Mobil 1 season officially commenced during the early weeks of February, championship points were not accumulated, thus giving teams ample time to make a decision regarding their travel commitments for the 2019 season.

With that said, Tony Stewart’s All Star Circuit of Champions will be represented by 15 full-time drivers on the 2019 touring roster, each bringing a long list of accolades that will push the upcoming All Star season to become one of the most competitive, if not one of the most talented, in Series history; arguably, the most competitive roster of Tony Stewart’s five-year tenure.

Although away from full-time All Star competition for a pair of seasons, Hartford, Ohio’s Dale Blaney will make his return to full-time competition in 2019. The six-time Series champion, who will hit the road with Sam McGhee Motorsports, will hunt for an unprecedented seventh Series title during the coming months, only adding to an illustrious All Star resume that already includes the most main event victories in Series history.

Benton Ridge, Ohio’s Greg Wilson will also return to the All Star trail in 2019 after several years away from full-time competition. Like Blaney, Wilson is a former Series champion who will attempt to add another title to his racing resume, a third overall.

“This is going to be a very competitive season for the All Star Circuit of Champions. I think everyone is excited, especially the fans, to see how this is going to unfold,” Tony Stewart explained, All Star Circuit of Champions owner. “This is a very talented group of full-time drivers and teams. We are very proud to have these guys represent our series and travel with us up and down the highway. The fans are in for something very special in 2019.”

2019 All Star Circuit of Champions Roster:

After an impressive 2018 campaign that included nine All Star Circuit of Champions victories in 40 feature starts, Clute, Texas’ Aaron Reutzel will return to the road full-time in 2019, aiming at a second consecutive All Star championship aboard the familiar Baughman-Reutzel Motorsports No. 87. Reutzel, who also amassed an impressive 20 top-five finishes during All Star competition in 2018, earned the driver title by a mere-64 points over Lemoore, California’s Carson Macedo; a dramatic championship battle that flip-flopped on multiple occasions over the course of the season.

Returning to the Tom Buch-owned No. 13 entry, Nashville’s Paul McMahan will rejoin the All Star Circuit of Champions in 2019, working to improve on his 2018 season statistics that includes a top-five within the final All Star championship standings, as well as the Ohio Sprint Speedweek title. In fact, McMahan finished fourth in the overall driver chase last season, earning a pair of victories along the way, each occurring during the month of June. The former All Star turned Outlaw turned All Star earned his Series triumphs during competition at Outlaw (N.Y.) Speedway and Attica (Ohio) Raceway Park.

After dropping off the tour early in 2018, Sarver, Pennsylvania’s John Garvin will try it again and return to All Star Circuit of Champions competition full-time in 2019. The former Western Pennsylvania super late model hotshot, who earned runner-up finishes in prior Lernerville Speedway championships, will wade in sprint car waters once again and hunt for a career-first All Star Circuit of Champions victory. The driver of the Liz Matus Racing entry finished ninth in the 2017 All Star championship chase, accumulating three top-ten finishes in 18 feature starts.

For a third consecutive season, Lancaster, Pennsylvania’s Tyler Esh will be a full-timer with Tony Stewart’s All Star Circuit of Champions, working to continue an upward trend of competitiveness that includes an eighth place finish in the 2018 championship standings, that of which padded by a pair of top-ten performances. Although unable to put a check in the All Star win column just yet, Esh, driver of the Esh Racing No. 35, does own one victory in Central Pennsylvania, that occurring at the ‘Fabulous’ Lincoln Speedway in early April of last year.

After concluding his 2018 All Star Circuit of Champions season with a sixth place finish in the final championship standings, Vienna, West Virginia’s Cale Conley will return to the road once again in 2019, resuming his position the familiar No. 7K for car owner, Dave Jessup. Conley, the lone West Virginian on the All Star roster, highlighted his 2018 campaign with seven top-ten finishes, two of which inside the top-five. Conley highlighted his year with a runner-up finish at BAPS Motor Speedway on August 26.

A name certainly synonymous with All Star Circuit of Champions competition, Hartford, Ohio’s Dale Blaney will return to the tour full-time in 2019, taking command of the Sam McGhee Motorsports No. 11. Blaney’s return will mark the end of a two-year hiatus from full-time All Star competition, working to become an unprecedented seven-time Series champion, already owning the top spot on the all-time winners board. Blaney’s last completed season with the All Stars ended second in the championship standings, finishing a mere-20 points behind fellow Buckeye, Chad Kemenah.

Piloting one of two Premier Motorsports entries for car owner, Pete Grove, Lebanon, Indiana’s Spencer Bayston will hit the road full-time in 2019 searching vigorously for a first-ever All Star Circuit of Champions title. Although a rookie traveler with Tony Stewart’s All Stars, Bayston, the 2017 USAC National Midget Series champion, as well as the 2017 4-Crown Nationals and Belleville Midget Nationals champion, is certainly no stranger to All Star Competition. The former midget star has earned two All Star victories over the course of his career, each occurring during the 2017 season; one at Attica (Ohio) Raceway Park and one at Muskingum County Speedway near Zanesville, Ohio.

Former American Sprint Car Series (ASCS) full-timer, Skylar Gee, will bring a little Canadian flair to the All Star Circuit of Champions in 2019, as the Leduc, Alberta-native plans to hit the road full-time in search of a first-ever Series victory, as well as Rookie of the Year honors. Gee, who finished seventh in the final ASCS National Tour standings in 2018, will work to transfer his experiences from the 360c.i. national scene to the All Star ranks, all while behind the wheel of his own Skylar Gee Racing No. 99.

Although never a full-time competitor with the All Star Circuit of Champions, New Oxford, Pennsylvania’s Gerard McIntyre has already earned his way into the Series’ history books. McIntyre, who will drive the Coldren Motorsports No. 07 in 2019, will work for Rookie of the Year honors during the upcoming season, hoping to pad his racing resume with additional All Star victories like the one earned in Upstate New York in 2018; a $7,000 payday at Lebanon Valley Speedway. Including his victory in the Empire State, McIntyre accumulated a grand total of four All Star top-tens in 2018, all of which accomplished during just 16 main event attempts.

Working to mount a successful charge toward Rookie of the Year honors with Tony Stewart’s All Star Circuit of Champions, Chicora, Pennsylvania’s George Hobaugh will hit the road full-time in 2019, bringing to speed his own Hobaugh Motorsports No. 40. Certainly a star within the micro sprint and 305c.i. sprint car ranks, accumulating nearly 100 victories and five championships, Hobaugh is also well-respected within the 410c.i. ranks, as he owns a victory during open competition at Sharon Speedway. Speaking of Sharon Speedway, Hobaugh highlighted recent All Star starts with a runner-up finish during the 2018 Lou Blaney Memorial.

Newville, Pennsylvania’s Mallie Shuster will bring a different class of competitiveness to the road in 2019, as the former PIAA AAA state wrestling champion and NCAA Division 1 national qualifier will join the All Star Circuit of Champions full-time in hopes of out-performing a stout first-year contingent for All Star Rookie of the Year honors. Aboard his Shuster Motorsports No. 49, Shuster, who will battle alongside his father, Jim Shuster, during his ventures in 2019, is a former regular competitor in the 360c.i. ranks at Selinsgrove (Pa.) Speedway, ending his 2018 campaign seventh in the final track standings.

Not the first to join the All Star Circuit of Champions lineup with an immediate family member, Newville, Pennsylvania’s Jim Shuster, who will race head-to-head with his son, Mallie Shuster, during the coming months, will tackle the All Star schedule full-time for the first time in his career in 2019. A former regular in the 360c.i. ranks, Shuster will enter the new year hot off of a top-ten appearance in the 2018 Selinsgrove Speedway track championship standings, capping the year tenth in the final point chase.

After three consecutive seasons of racing on the road with the World of Outlaws Sprint Car Series, Benton Ridge, Ohio’s Greg Wilson will return to the All Star Circuit of Champions ranks in 2019 and hunt for a third Series championship, a first since 2007. Wilson, pilot of the ever-familiar W20 sprint car, owns 25 All Star Circuit of Champions victories over the course of his storied career, also earning an Ohio Sprint Speedweek championship in 2015.

With a Port Royal Speedway track championship already under his belt, Jonestown, Pennsylvania’s Brock Zearfoss will attempt to take his sprint car career one step further in 2019 and accomplish not only All Star Circuit of Champions Rookie of the Year honors, but also throw his hat in the ring for an All Star championship. Zearfoss, who will pilot a second Premier Motorsports No. 70 entry for Pete Grove, brings a stout resume to the road which includes not only a track title at a competitive Central Pennsylvania oval, but also a World of Outlaws victory at the world-renown Williams Grove Speedway.

The Ollie’s Bargain Outlet All Star Circuit of Champions presented by Mobil 1 will kick-off the 2019 championship points season with a four-race sweep through the Mid-Atlantic, first visiting the state-of-the-art Virginia Motor Speedway in Jamaica, Va., on Thursday, April 11. The Thursday night showstopper will award a $10,000 top prize.

The four-race weekend will continue with a trio of stops in the Keystone State complete with visits to Williams Grove Speedway, Port Royal Speedway and Bedford Fairgrounds Speedway on Friday through Sunday, April 12-14, respectively.