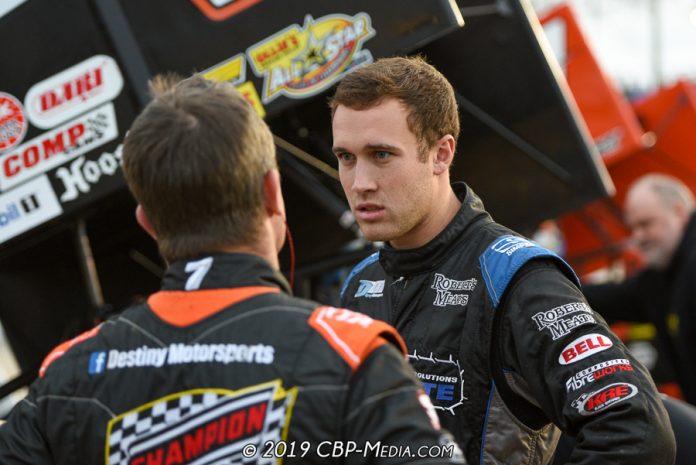 TUCSON, AZ – With the World of Outlaws NOS® Energy Drink Sprint Car Series California swing now concluded, David Gravel and Carson Macedo are looking to ride the momentum of their recent strong finishes into this weekend’s doubleheader in Arizona.

For Macedo and his Kyle Larson Racing team it was the continuation of an impressive stretch of races — finishing in the top-10 in all five races during the California swing, including claiming his second career win at Silver Dollar Speedway — while for Gravel, his win was finally the end to a stretch of three races in-a-row without a top-10 finish.

The win was needed, Gravel said.

“We started off the season pretty good at Volusia and kind of laying an egg since,” Gravel said.


He finished third in points with CJB Motorsports last year, but Gravel and the team decided to part ways. That opened the door for him to join Jason Johnson Racing this year. While he and his new team have found success, Gravel admitted the transition hasn’t been entirely smooth.

“I made a couple of mistakes as a driver,” Gravel said about the season so far. “Growing pains with the new team. Hopefully we hit our stride here and get on a role.”

After claiming an emotional win for the JJR team in Hanford, Calif. — the team’s first World of Outlaws win since Jason Johnson died last year — he was unable to make it back in the top-10 the next day at Perris Auto Speedway. But he said he is looking forward to the Arizona races, having run decent at them in the past.

He finished sixth at Arizona Speedway last year and had a top-10 run at USA Raceway the last time the Series visited the track in 2016 — that race won by Daryn Pittman, who is currently tied for the Series points lead with 10-time Series champion Donny Schatz. Gravel is currently seventh in points, 92-points behind the two champions.

Macedo was not at either of those races, but also said he is looking forward to the doubleheader in Arizona. He’s raced at both Arizona tracks before and hopes to use that experience to his advantage as well as he did during the California swing.

“I knew the West Coast was going to be, hopefully, one of our strong suits,” said Macedo, who is now fourth in points after the California swing. “So, to kind of put that together and get a win, put strong runs up on the board and leave the West Coast I pretty good shape is big for this (Kyle Larson Racing) team. Especially being in the rookie year.”

While the California native lacks World of Outlaws experience at the two Arizona tracks, his KLR team has years of it. Successful years of it. The team won the first Series race at Arizona Speedway in 2016 with Shane Stewart and haven’t finished outside the top-10 at the track since. KLR also finished in the top-five with Stewart at the last Series race at USA Raceway.

“I’m looking forward to it all,” Macedo said.