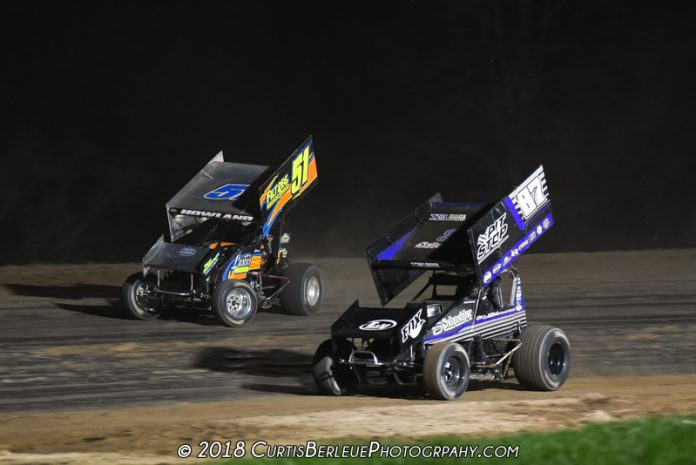 CANANDAIGUA, NY – The 2019 A-Verdi Storage Containers Patriot Sprint Tour season is upon us as the best 360 sprint car racers in the northeast are gearing up for the series point opener at Land of Legends Raceway in Canandaigua, New York on Saturday, April 27.

Saturday’s race will be the 16th time the tour visits the Ontario County facility and the 322nd race in the organizations 16th season.

The tour held one race last season at the famed half-mile and it was Jason Barney taking the win over Chuck Hebing and Bryan Howland. After winning in back-to-back seasons in 2007 and 2008, Barney overcame a ten-year winless drought at Land of Legends last season in very convincing fashion. The other scheduled event in 2018 was won by Mother Nature.

Barney will be joined by an extremely strong field of contenders that includes three time and defending PST champion, Chuck Hebing who has won at LoL on five different occasions. Also expected to be in attendance is Jared Zimbardi, Joe Trenca, Paulie Colagiovanni, Jordan Thomas, along with several other PST competitors.

The traditional PST racing format will be in play this weekend which includes open draw for our eight lap heats, while passing points determine our top eight re-drawers. The drivers who finish in positions 9-14 in passing points will run in the Bonnell’s Rod Shop Four Laps of Fame Dash. Passing points will then determine starting positions 15-24. Saturdays A-Main distance is 25 laps.


Gates for Saturday’s race is set to open at 5:00 p.m. with racing slated for 7:00 p.m. General Admission tickets are set at just $15, while the pit price is $30. Fans are encouraged to visit PST Social Media on facebook, twitter, and Instagram daily for immediate updates regarding the Patriot Sprint Tour.