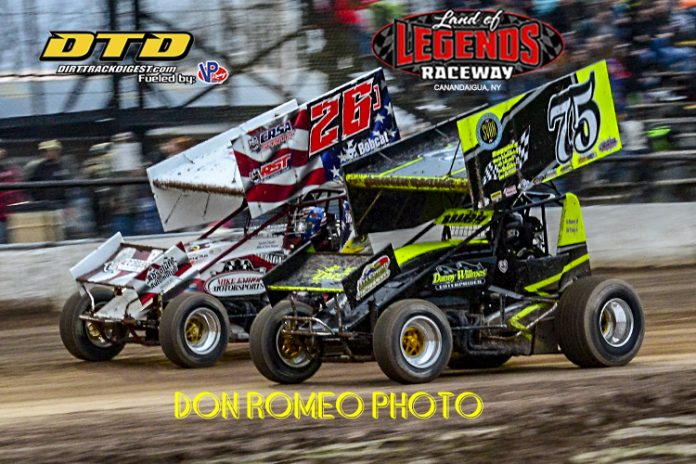 SODUS, NY – As April showers bring more May showers, the SuperGen Products/Champion Power Equipment CRSA Sprint Car Series is gearing up for the 2019 racing season. The 14th season of operation for the CRSA Sprint Car Series will see them visit seven tracks representing the Capital District, Central New York and Southern Tier regions of New York State. In all 14 events make up the 2019 campaign.

Just over a week later the series moves to the Weedsport Speedway for the second round of 2019 on Memorial Day, May 27th. The maiden event at the Central New York facility will see the CRSA competitors going for a $1,000 to win top prize, courtesy of event sponsor Midstate Basement Authorities.

Round number three of the season takes place at the original home track of the CRSA, the Glen Ridge Motorsports Park. The Fastest Quarter Mile on Dirt will host the CRSA twice in 2019. This round will take place on Sunday June 2nd.

After just over a month lay-off, the CRSA will make their first visit of the season to the Afton Motorsports Park on Friday July 12th. The short track located just off Interstate 88 in the Southern Tier of New York State will bring the series back to action and kick off a busy month of July.

The Land of Legends Raceway kicks off a two-race weekend on Saturday July 20th. The $750 to win event will be followed by a trip to the Thunder Mountain Raceway near Cortland a day later. The season concluded at Thunder Mountain in 2018.

Round number seven of the 2019 season kicks off a two-day weekend in the Capital District. The CRSA makes their first visit of the season to New York’s oldest track still in operation – the Fonda Speedway. The $1,000 to win event will be followed by the second and final trip to the nearby Glen Ridge Motorsports Park on Sunday.

For the ninth round of the season the stars and cars of the CRSA head to the northeastern part of the Capital Region and Lyle DeVore’s Albany-Saratoga Speedway. The event will take place on Friday August 9th.

The Land of Legends Raceway hosts round number ten of the season on Saturday August 17th. The third and final $750 to win event on the schedule is the final tune up for the inaugural New York Sprint Car Nationals Weekend in September.

Rounds number 11 and 12 take place during the New York Sprint Car Nationals Weekend. All eyes will be on Canandaigua, New York as the half-mile hosts the best that Sprint Car racing has to offer on September 6th and 7th. The Saturday night show (September 7th) will pay $1,000 to the winner.

The CRSA returns to action at the Track of Champions on Saturday September 14th. The final event at the Brett Deyo promoted facility along the mighty Mohawk River will pay $1,000 to the A-Main winner. The season will conclude on Friday October 11th at the Afton Motorsports Park as part of the Deyo’s promoted Short Track Super Nationals.