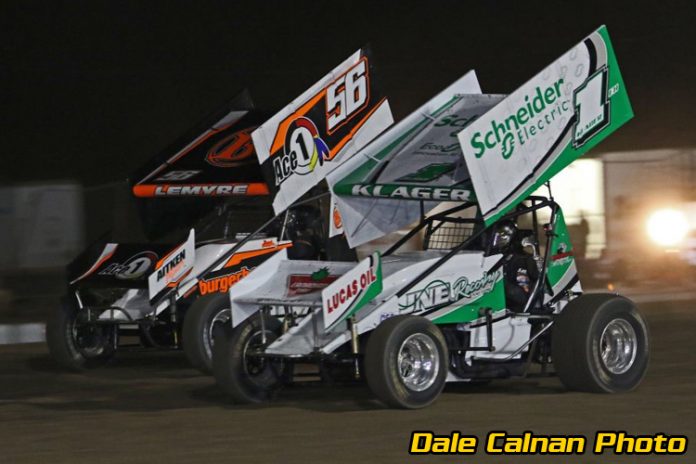 OHSWEKEN, ONT – A long and tenuous off-season has finally come to an end for the Action Sprint Tour. Ontario’s Crate Sprint Car travelling series will kickoff its 10-race sophomore campaign at Merrittville Speedway on Monday, May 20. The field in action will likely be familiar, but will also feature a handful of new cars and drivers in action.

The inaugural series champion, Shone Evans, along with runner-up Aaron Turkey have taken their talents to the 360 Sprint Car division, which opens the door for a new champion in 2019. Port Colborne, Ont. teenager Jacob Dykstra, a two-time winner with the series, will look to kick his season off on the right foot with a strong finish in order to improve on his third-place overall finish last season. Dykstra was one of two winners at Merrittville last season (Evans was the other) and recorded a sixth-place result in his other start.

The other two top-five finishers in the inaugural championship standings were Ryan Hunsinger and Paul Klager. Hunsinger is a Sprint Car veteran entering his sixth season in the Crate division, but has started his own team for the first time and will drive car No.r52. Meanwhile, Klager is no stranger to Merrittville. The driver affectionately known as “the Beamsville Bullet” has likely thousands of laps around the Thorold track in a Mod Lite and is now entering his second season in a Crate Sprint Car with hopes of earning his first Sprint Car win at his former home track.

Four of the drivers who finished in positions 6-10 are expected to return to the tour. Fonthill’s Steven Beckett was seventh in the standings one year ago with finishes of seventh and 13th at Merrittville. A top-five to open the season would certainly bode well for a strong season. Burger Barn Racing’s Dereck Lemyre was ninth overall in the championship standings last year. Now entering his third season of Crate Sprint Car action, Lemyre has proven he has the skills to be a top-five runner on a consistent basis, and now needs a bit of luck to accompany him on the way. Teenage up and comer Liam Martin is also hoping for the next uptick in his career. He was tenth in the Tour standings last year and will look to pilot his No.29 to his first series win.

Waterford’s Brad Herron, who was sixth in the standings a year ago, will be the veteran on a rookie-laden Glenn Styres Racing (GSR) team. Herron will again drive car No.12 for GSR and look to improve on his second-place finish in this race last season and secure his first career win with the series and second in a Crate Sprint Car. He’ll be teammates with a trio Crate Sprint Car rookies including Noelle Teal in car No.14T, Johnny Miller in car No.20, and Spencer Davis in the No.83. The fifth member of the team is former Ohsweken Crate Sprint Car champion Jesse MacDonald in car No.88 who returns after a one-year absence.

Returning to the Tour in 2019 is St. Thomas, Ont. driver Jesse Costa. The pilot of the No.52 was the Series point leader through the first six races of 2018 before an injury in what looked like a harmless accident at Humberstone Speedway on August 12 sidelined him for the rest of the season. Costa is ready to get back behind wheel when the green flag drops and will look to make up for the season that got away from him 10 months ago.

Should they compete on the full tour, other top contenders could include Nathan Ackland Racing driver Jerry Hill in car No.49h, Barr Motorsports hot shoe Hannah Ferrell in the No.4 and sophomore Rob Neely in the No.74.

The 2019 Action Sprint Tour season will kickoff at Merrittville Speedway on May 20, 2019 with race time scheduled for 7:00pm. Pit gates are scheduled to open at 4:00pm before spectator gates open at 5:30pm. Adult grandstand admission is $16, while Seniors/Students are $14 and Youth age 8-12 are $7. Children under 8 are free. For additional event information, visit www.merrittvillespeedway.com.

For more information on the Action Sprint Tour, including a full break down of the Series’ 2019 point fund and race purses as well as series rules, visit www.ActionSprintTour.com.