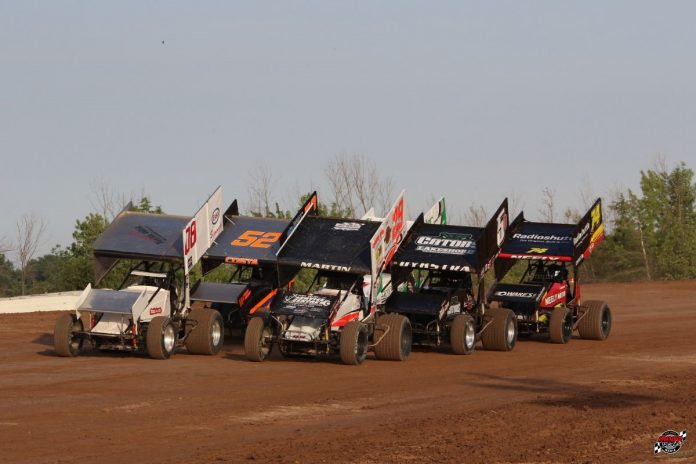 OHSWEKEN, ONT – The Action Sprint Tour is ready to resume its sophomore campaign with the second race on the 2019 schedule at Humberstone Speedway on Sunday, June 2: the Bob Deswiage Memorial. The race will be run in memory of former Team Turner Racing crew member and former Humberstone driver perhaps better known as “Bobby the Pilot”. Team Turner Racing will file a special No.2 entry for current crew member Brady Chastney in honour of Mr. Deswiage.

After a successful season opener at Merrittville Speedway on May 20 that saw 29 cars enter battle, the tour is now ready to make its fourth-ever stop at Humberstone. In three previous visits, the tour has seen three different winners in Aaron Turkey, Shone Evans and Matt Farnham. Turkey is likely the only driver who will enter the race and have a shot at repeating a trip to Victory Lane. If he is in attendance, he’ll be a true threat to win after also earning second and fourth-place finishes in addition to his win at Humberstone last year.

Meanwhile a host of drivers will be looking to become the fourth different winner at Humberstone. After his season opening win, Beamsville teenager Josh Hansen is the current point leader and will look to make it three straight wins with the tour dating back to last September’s finale at Ohsweken. Last season, he had a pair of top-five at Humberstone, including a third-place result on August 12.

Another tough challenged will be hometown favourite Jacob Dykstra. The Port Colborne, Ont. teenager finished third at Merrittville two weeks ago and had a pair of top-fives at Humberstone last year. Each time he unloads, the driver of the No.5d seems to improve behind the wheel.

A rejuvenated Brad Herron will also be a driver to watch at Humberstone. The Waterford-based pilot is once again behind the wheel of a Glenn Styres Racing entry and will look to better the fourth- and fifth-place results he earned at Humberstone last season. He’ll likely have to contend for a podium spot with GSR teammate Jesse McDonald, who was a runner-up finisher to start the campaign two weeks ago.

Another driver who perhaps planned to fly under the radar is Binbrook, Ont. teenager Liam Martin. The youngster had one top-five last year at Humberstone and started the year with a 13th-place finish at Merrittville that included earning the Hard Charger award after winning the B-Main. He followed up that performance with a win in weekly action at Ohsweken last Friday night and is now near the top of the list of drivers to watch this weekend.

Finally, don’t sleep on veteran Ryan Hunsinger. The driver of the No.r52 is driving for himself this year in a throwback paint scheme meant to honour his father, Ray Hunsinger’s, stock car career. After a fifth-place finish in the Merrittville lid lifter, he’s gotten a taste of success an Hunsinger is hungry to score his first win on the tour.

The 2019 Action Sprint Tour season continues at Humberstone Speedway on June 2, 2019 with race time scheduled for 6:30pm. Pit gates are scheduled to open at 4:00pm before spectator gates open at 5:30pm. Adult grandstand admission is $14, while Seniors/Students are $12 and Youth under 15 are free. For additional event information, visit www.humberstonespeedway.com.

For more information on the Action Sprint Tour, including a full break down of the Series’ 2019 point fund and race purses as well as series rules, visit www.ActionSprintTour.com.